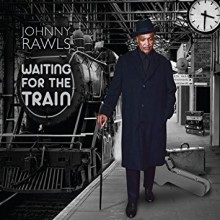 Title: Waiting For the Train

Mississippi-born Johnny Rawls has a long history in the industry, from serving as band director for soul singer O.V. Wright, to backing artists such as Z.Z. Hill and Joe Tex. The singer-songwriter and guitarist released his first solo project in 1985, and in 2014 was recognized by Living Blues magazine as “Male Blues Artist of the Year.” Rawls, however, is not a traditional blues musician. His southern roots are often more firmly planted in soul, with branches extending into the blues. Such is the case with his latest project, Waiting For the Train. This is Rawl’s seventh in a string of highly successful albums on the Catfood label. He’s accompanied by his long time band, The Rays, featuring label owner Bob Trenchard on bass. Trenchard also co-wrote the album’s six original songs with Rawls, which are interspersed with four fine covers.

Opening with “Rain Keep Falling (“Til I’m Free),” the tone is set with a tight horn section and rocking guitar solo from Johnny McGhee, while Rawl’s gravelly voice expresses a fearlessness about facing the future. This segues into “Las Vegas,” a song about high rollin’ and risk taking that many who have visited Sin City can surely relate to, but there’s also a more serious message about faith, hope and change. These themes emerge again in “Blackjack Was a Gambler,” a story song about “Jack and Sally” that seems to combine elements of “Mustang Sally,” “Stagger Lee” and “Jack & Diane.”

One of the highlights of the album is the title track, “Waiting for the Train,” a contemplative ballad featuring interesting chord changes and an excellent guitar solo. The train as a transport to heaven is a common theme in gospel music, and this is obviously Rawls’ intent as he sings in the voice of a man contemplating the afterlife, “Get on board and don’t look back . . . I’ve got to be ready, when it comes for me, I’ve got to be ready to be set free.”

Rounding out the album is the funky dance number “California Shake” that’s infused with a ‘70s vibe, and four cover songs including Wilson Pickett’s “I’m in Love,” Syl Johnson’s “We Did It,” Tyrone Davis’s “Turning Point,” and a nice rendition of Bob Dylan’s “I Shall Be Released.” Rawls closes with another original, “Stay With Me,” a poignant love song to a partner in life’s journey.

Waiting For the Train is a solid effort by soul-blues artist Johnny Rawls, offering songs that are especially relevant to those of a certain age who have faced many obstacles but still find the strength to push forward towards the promised land.