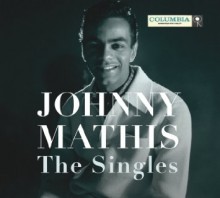 Johnny Mathis, who started his recording career at the age of 19, is one of the longest-running artists on the Columbia label, with over 17 million album and single sales in the U.S. alone. Known for his lush vocals, Mathis covered a variety of styles ranging from traditional pop to jazz standards, and was equally at home singing sacred or secular music.

Now, in celebration of the 80th birthday of the legendary pop vocalist, Legacy Recordings has released a definitive four disc anthology, The Singles, featuring every non-LP single Mathis released for the label between 1956-1981, as well as tracks released exclusively on three previous compilations: Johnny’s Greatest Hits (1958), More Johnny’s Greatest Hits (1959), and The First 25 Years (1981). Additionally, 31 of the 87 tracks on this set have never been reissued on CD. Ranging from his top charting hits such as “Wonderful! Wonderful!” to a variety of holiday classics, songs from films, and many lesser known singles, this nicely produced anthology showcases the many sides of Johnny Mathis. The accompanying booklet includes an introduction penned by Mathis, an article by producer Didier C. Deutsch, and complete discographical information for each track.

If you’re expecting to find “Misty” or his duet with Deniece Williams “Too Much, Too Little, Too Late,” both of which appeared on albums, you’ll have to wait until next year when Legacy releases the Johnny Mathis box set “Complete Album Collection.”