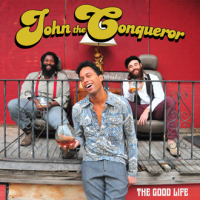 The signature growling guitars and low lonesome drawl of John The Conqueror are back in full force with their second album, The Good Life. The Mississippi to Philly transplant Pierre Moore and his three-piece blues-rock outfit stomp out eleven tales of the rambling lifestyle—drinkin’, sinning, lovin’ and general bluesy behavior. Moore and his band are, in truth, somewhat of an anomaly. In the contemporary blues scene, a young black artist playing the blues is unfortunately a noteworthy development. In recent years, the black community has largely ignored the contemporary blues scene, and it’s truly great to see artists like Moore and his blues-rock contemporary Gary Clark Jr. taking traditional forms of North Mississippi blues and pushing it forward into more modern iterations.

Building on the strong impression left by their self-titled debut, John The Conqueror provides a steady stream of heartfelt tunes that don’t hesitate to rock hard. It’s music made for beer-soaked floors packed with sweating crowds and middle-of-nowhere dives that have that couch in the corner with gross stains on it. The album is rowdy enough to move a crowded barroom, but at times introspective enough to provide an intriguing listen alone by your speakers. Riff driven song structures and juke joint drums both serve as a vehicle for Moore’s fuzzed-out, soulful vocals. This recipe is no aberration for the barbeque soaked sounds of Alive Records, a label home to many big names in the outsider blues community, including Left Lane Cruiser, Lee Bains and Buffalo Killers. (Alive is also the home of The Black Keys debut album, The Big Come Up.)

Sonically, the album does get a bit stagnant; there is no discernable change in guitar tone, drum sound, vocal processing or overall tone color in the entire album. And while consistency can breed an instantly recognizable brand, when it comes to the simplistic structures of heavy blues, a little variance can go a long way to refreshing a listener’s palette. For this reason, the album’s highlights come when Moore and his crew throw a couple curveballs. On “John Doe,” a minor key and spacious slow burn give Moore the space to drive his emotions home with his signature grit. By opening up the arrangement, when the staccato organ enters with crashing guitars, it hits that much harder and the effect is fresh again. The moody “Daddy’s Little Girl” employs a similar technique, but its magic lies in the sincerity of Moore’s painful howl. Here he drops the cocksure bravado and reminds us that this is an album rooted in the depths of the blues. The guitar is nastier, and the vocal performance in the final minute makes the whole album worth it. This is a glimpse of humanity and remorse that makes the blues so compelling, despite its humble nature. It’s a brief glimpse of what happens when the life of the party goes home to an empty bed, alone with his thoughts, fears and regrets. As John The Conqueror move forward, that balance of swagger to vulnerability is a flash of songwriting maturation that will only grow stronger with future albums.

Releases like The Good Life elicit the headache-inducing argument of what qualifies as a “blues album.” Where does the blues end and rock and roll begin? The purists wring hands and clutch 78s clinging to traditional styles and closely guarding the genre. The progressive types see a slow gradient where boundaries are blurred and electric shredders sit shoulder to shoulder with country pickers. But perhaps it’s an exercise in futility to apply labels to artists like Moore. Black Country? Blues? Deep Blues? Rock ‘n’ Roll? “The Good Life” is American music done with passion and care, drawing plenty from the past and gleaning just as much from the present. Whatever you call it, just make sure you have the windows down and stereo cranked. Deep fried and defiant, John The Conqueror demands you turn up and listen loud.