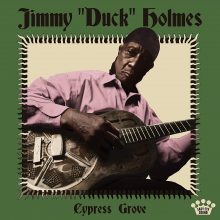 Mississippi bluesman Jimmy “Duck” Holmes literally grew up in a southern juke joint. His mother and father established the historic Blue Front Café in 1948 in the town of Betonia—ground zero for the minor-tuned, acoustic country blues style made famous by Jack Owens and his predecessor, Skip James. Now a prominent stop on the Mississippi Blues Trail, the Blue Front Café has been run for the past 47 years by Holmes, who can still be heard nearly every weekend singing and playing his acoustic or hollowbody electric guitar. As possibly the last living musician who was weaned on the Bentonia blues style, Holmes aims to keep the tradition alive on his latest album, Cypress Grove. Produced by Dan Auerbach of the Black Keys, the project captures classics performed in forward looking renditions that stay true to their roots while bringing a spontaneity into the mix. Backing Holmes is an all-star cast of musicians including Auerbach and Marcus King on guitars, Eric Deaton on bass, and Sam Bacco on drums and percussion.

Delta-born musicians more commonly affiliated with Chicago blues are also given a nod, with renditions of Jimmy Rogers’ “Goin’ Away Baby,” Muddy Waters’ “Rock Me” featuring King and Auerbach on guitars, and a richly layered version of Willie Dixon’s “Little Red Rooster” with Leon Michels adding a sax solo. Less well known amongst this group is Robert Petway, but you’ve likely heard his song “Catfish Blues,” popularized by Muddy Waters and Jimi Hendrix, among others. Holmes’ cover hews close to the original through the first two verses, then the band is unleashed to rock hard on the 16-bar instrumental break that evokes the Hendrix era.

Closing the album are several of Holmes’ originals, including “All Night Long,” “Gonna Get Old Someday” and “Two Women,” which all maintain their traditional country flavor but with the added spice of fuzzy guitars, cymbal riffs, and walking bass lines.

Cypress Grove is a win-win for both Duck Holmes and Dan Auerbach, who should be commended for maintaining the traditional Betonia blues style while augmenting the harmonic and rhythmic texture through the judicious use of added instrumentation and percussion.