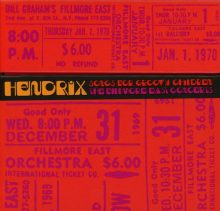 In the summer of 1969, Jimi Hendrix broke away from The Jimi Hendrix Experience and formed a new trio with bassist Billy Cox and drummer Buddy Miles. The album that was spawned from this black power trio was Band of Gypsys, which featured six songs from the concerts at the Fillmore East on January 1, 1970. As an album much revered by Hendrix fans, as well as one of the best live albums in rock and roll history, Band of Gypsys has certainly received its share of accolades. Songs for Groovy Children supplements this classic live album by including over two dozen previously unreleased tracks and all four of the Band of Gypsys’ performances from the Fillmore East on New Year’s Eve 1969 and New Year’s Day 1970.

The Band of Gypsys iteration of Hendrix’s career was a departure for the iconic artist. The Jimi Hendrix Experience with Mitch Mitchell and Noel Redding was both pop-oriented and psychedelic. Band of Gypsys consisted of Hendrix’s Army buddy Billy Cox on bass along with Electric Flag drummer Buddy Miles. Miles had played in Electric Flag with underground blues icon Mike Bloomfield, so he was not new to collaborating with an outstanding guitar player. But Electric Flag was not purely a blues ensemble; they had an R&B feel to their songs as well. Hendrix was a strong blues player, but he was more experimental than Bloomfield sonically. Thus, the pairing of Cox and Miles took Hendrix in a new direction, but one that drew heavily on his roots in the blues and R&B, as exemplified by songs like “Changes.”

One of the primary points in favor of this five CD box set is the participation of mastering engineer Bernie Grundman, who brings an eclectic resume to the table. Grundman is responsible for mastering albums such as Michael Jackson’s Thriller, Steely Dan’s Aja, and Dr. Dre’s The Chronic. While each of these albums is a classic in its own right, one would be hard pressed to find much similarity amongst them. With this in mind, Grundman’s seasoned ear for mastering has greatly enhanced the quality of the final product, which presents newly mixed and restored tracks in concert sequence without edits. Also included is a forty page booklet featuring liner notes by Nelson George and many previously unpublished photographs.

Though Hendrix played some of his hits such as “Fire” and “Purple Haze” from his original trio on the later shows, he opened his first performance at the Fillmore East with a set list that included none of his earlier hits—signifying a clean break from his previous band. Part of what makes this collection so intriguing is the opportunity for in-depth study of a later version of Jimi Hendrix’s ensembles. Questions that Hendrix fans will always have about what might have been are not answered here, but the listener gets a strong dose of his live performances from the final year of his life.

Just as on the original Band of Gypsys album, “Machine Gun” remains the cornerstone of this experience. The great thing about this box set is that the listener is given four versions of this song. On the second show from December 31, 1969, Hendrix’s quote of “Taps” utilizing both whammy bar and feedback is spine-chilling not only for its symbolism, but purely for its sonic artistry. Without being critical of the version of “Machine Gun” on Band of Gypsys, the two performances from the 1969 shows are arguably superior.

Another strength of this box set is that fans can listen to the live version of a song such as “Ezy Rider” that was released posthumously as a studio version. Another example and one of the highlights is the live version of “Purple Haze.” Hearing one of Hendrix’s first hits in a live setting is insightful, in part because his guitar was out of tune, which serves as a demonstration of what a strong player he really was. “Izabella” also stands out as one of the great performances in this anthology.

The set lists are also a compelling case study in performance practice. There are a couple of songs that were played at all four shows—“Changes” and the aforementioned “Machine Gun” —while “Power of Soul” and “Earth Blues” were played at three of the engagements, and other songs were featured at two of the shows. This duplication of repertoire provides the listener with an opportunity to hear the differences in Hendrix’s guitar sound from show to show, and it is especially exciting to be able to listen to the songs that were played at both shows on the same night. The level of improvisation that Hendrix brought to every song can truly be appreciated when versions played on the same evening can be compared to one another. Though it is a shame that “Voodoo Child (Slight Return)” is only played once, this live version is easily one of the best performances in this set. All of Hendrix’s trademarks are present on this track—feedback, fuzz, wah-wah, and whammy bar. For members of the younger generation who ask, “What did Jimi Hendrix sound like?,” this song serves as the perfect answer to the question.

Though there are multiple performances of several songs, nothing in this anthology is superfluous. Every track has merit. The five-CD box set is already available, and the eight-disc vinyl release will follow on December 13. Songs for Groovy Children will make the perfect holiday gift for all rock and roll enthusiasts, but it is mandatory listening for fans of Jimi Hendrix.