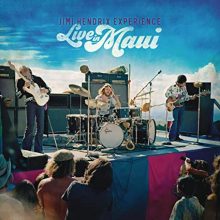 Rarely a year goes by without a new release from the Hendrix archives and 2020 is no exception. This year’s offering, Live In Maui, features both the audio and video documentation of the “Rainbow Bridge Vibratory Color/Sound Experiment” concerts performed by the Jimi Hendrix Experience in Hawaii on July 30, 1970, plus a new documentary and liner notes that chronicle the story behind the making of the film Rainbow Bridge. As is the case with the majority of these posthumous releases, the results are a mixed bag. For most Hendrix fans, however, there is likely enough new, high quality content to warrant the purchase of this three disc set. First and foremost, there’s the music, a remarkable live performance previously available only on bootlegs, offered here in superb sound, newly restored and mixed by Eddie Kramer and mastered by Bernie Grundman.

Performing on a makeshift concert stage constructed on a windy hill between Maui’s Haleakala volcano and the ocean, the Jimi Hendrix Experience runs through two complete sets recorded on the same afternoon before a very small audience. Spread across two CDs, there’s little overlap in the set list, which features songs released on the group’s pre-1970 studio albums as well as posthumous releases including Rainbow Bridge and The Cry of Love. What sets these concerts apart from previous releases are the live performances that capture Hendrix at his peak, riffing on songs such as “Lover Man” and “Hey Baby (New Rising Sun)” that had not yet been released. Other standards of the band’s repertoire, such as “Hear My Train,” “Voodoo Child (Slight Return)” and “Foxey Lady” are performed with a stunning intensity and freely improvised passages, such as the intro to “Ezy Ryder.” Criticisms regarding the audio are primarily focused on the tampering of the sequence of the first set (apparently due to technical flaws of the recording), as well as Kramer’s mix that tends to bury Billy Cox’s bass.

Also included is a Blu-Ray disc with the new documentary Music, Money, Madness . . . Jimi Hendrix In Maui as well as all extant 16mm color footage of the two concerts. The former focuses primarily on Chuck Wein, the director of the ill-fated film Rainbow Bridge, but eventually segues into a discussion of Hendrix and the Hawaii concerts. Concert footage is incomplete, but features clips from both sets, with Hendrix performing on his Stratocaster and then switching to his Gibson Flying V for the second set. The quality of the color film is superb, especially considering it was shot 50 years ago, and the mix includes both a stereo and 5.1 surround sound version.

For those who are not avid collectors of all things Hendrix, Live In Maui will most certainly introduce new material. Filmed and recorded just two months before Hendrix’s death, the concerts capture a unique moment in music history and leaves us wanting so much more.