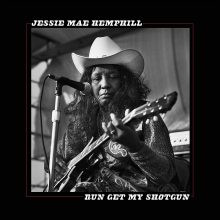 Jessie Mae Hemphill (1923-2006) comes from a long line of legendary Mississippi blues musicians. Her great grandfather Dock Hemphill was a renowned fiddle player from Choctaw County and her grandfather Sid Hemphill was a fiddle player and bandleader who recorded for Alan Lomax and George Mitchell. Jessie Mae was a talented singer, songwriter, guitarist, and drummer whose first recordings were made with blues researcher George Mitchell and ethnomusicologist David Evans in the 1960s and ‘70s. This new release by Big Legal Mess, Run Get My Shotgun, is a collection of field recordings by the late musician from New Year’s Eve 1989, a few years prior to her retirement.

The opening song and title track immediately makes clear why Jessie Mae is considered one of the pioneering female blues musicians of her era. “Run Get My Shotgun” is a foot-stomping, soulful song that sets the tone for the nine tracks to come. The recordings showcase Jessie Mae’s skillful guitar playing and gritty vocals in her usual stripped down style. Each song is simple and poignant, telling the story of lost and unrequited love. Her expressive vocals evoke sorrow and wistfulness while her guitar and tambourine playing make you want to move along to the beat.

Known as the “Queen of the Guitar Boogie,” Jessie Mae Hemphill was an influential Delta blues musician who could truly do it all. Run Get My Shotgun is a fine tribute to the late artist, featuring tracks that present Hemphill in the traditional, downhome style that earned her notoriety.