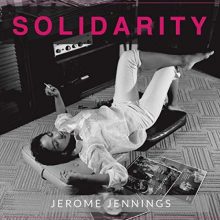 Jazz drummer Jerome Jennings highlights his compositional skills on his latest release, Solidarity, marking his second album as a leader. This groundbreaking project focuses on the experiences of African American women, who he explains have “traditionally been the conscience of the country.” In his view, “solidarity means…being present, not walking away. Being an ally, in a very overt way. ‘I got you. I hear you. I’m with you.’”  Jennings turns this laser sharp focus on injustices faced by women from all walks of life, as well as those who have made a significant difference through various movements such as Black Lives Matter, #MeToo, Civil Rights, and more. Joining him on this quest is his core unit—Josh Evens (trumpet), Stacy Dillard (tenor and soprano sax), Andrae Murchinson (trombone), Zaccai Curtis (piano), and Christian McBride (bass) —along with a number of special guests.

Each of the seven original tracks on the album highlight a specific Black female “Superhero.” Like a soundtrack to a film noir, “Recy’s Lament” eulogizes Recy Taylor, a women raped by six white men in 1944 whose case was championed by Rosa Parks. Jennings shifts to a free form 6/4 counterpoint in the closing bars, “shouting” at the injustice of the six defendants who escaped prosecution. The following track, “Marielle,” dedicated to the recently assassinated Afro-Brazilian activist Marielle Franco, features master conguero Carlos Maldonado and Zaccai Curtis contributing to the Latin groove, with Tia Fuller on soprano sax. Jennings learned about the intersectional feminist philosopher Audre Lorde through his wife, poet and scholar Naomi Extra. The “Theory of Difference” mirrors Lorde’s fierce literary output dealing with issues related to civil rights, lesbianism, and the exploration of black female identity.

Jennings’ talent is also showcased on two solo drum pieces, the album’s title track and “Heart,” both reinforcing the themes of the project. On “Heart,” he begins with a steady pulse and slowly builds to an explosive climax that hits like an adrenaline rush coursing through the body when threatening situations arise. One of the most interesting and provocative tracks is “Convo with Senator Flowers,” a “duet” for spoken word and drums that utilizes audio clips of Arkansas State Sen. Stephanie Powers’s impassioned protest against a proposed Stand Your Ground law.

Jennings closes with a nuanced performance of “You Are Never Far Away From Me,” featuring McBride and Endea Owens on bass. Dedicated to his wife as well as “the most vulnerable in our society,” the track provides a moment for reflection, reminding us to hold our loved ones close while not forgetting the sacrifices and struggles of all women. As Jennings states, “I’m just trying to do my part, using the music I love.” That’s a powerful lesson for us all.