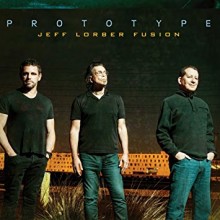 Jeff Lorber is generally considered jazz fusion, not smooth jazz. I don’t have the time or space to debate that pressing issue, but whatever you want to label it, Lorber has carved out a pretty good niche for himself. Lorber, who grew up in Cheltenham, a suburb outside of Philadelphia, just released his latest project, Prototype, with his group Jeff Lorber Fusion: Lorber on keyboards, with saxophonist Andy Snitzer (also from Cheltenham), bassist Jimmy Haslip (founding member of The Yellowjackets) and drummer Gary Novak. Special guests include bassist Nathan East, guitarists Chuck Loeb, Larry Koonse, Michael Thompson and Paul Jackson, Jr., and saxophonist Dave Mann. It’s vintage Lorber, which means a ‘real jazz ‘ fan may frown due to the infusion of multiple genres: rock, soul, funk, blues, pop, R&B and gospel.

Stand outs, such as the title track featuring Andy Snitzer on alto sax, make this album a worthwhile listen. On “Testdrive,” which begins with a Steely Dan sound, I was anticipating Donald Fagan any second on vocals. No Fagan, but Andy Snitzer on alto sax again comes to the rescue. “What’s the Deal” is a more upbeat Tower of Power inspired track, with the flow really changing and creating a different sound for Lorber, who switches to B3. The closer, “River Song,” starts off like the theme for a sappy ‘80s sitcom, but give Lorber credit. Just when you think you have the answer, he changes the question.

Yes, Prototype is smooth jazz. Jeff Lorber stays in his lane and apparently, he has it all to himself.