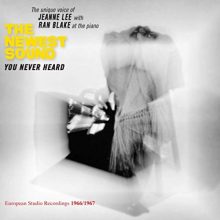 In 1962, African American singer Jeanne Lee (1939-2000) and pianist Ran Blake set the jazz world on its ear with their landmark debut album, The Newest Sound Around. The duo’s unorthodox interpretations were a result of their wide-ranging influences including film noir, the avant-garde, free jazz, blues, spirituals, gospel, and more. The two continued to collaborate throughout much of the ‘60s, including European tours in 1966 and 1967.  During one of those tours, Lee met German jazz musician Gunter Hampel, whom she later married.  From that point forward, most of Lee’s work was based overseas, hence she is not as well-known in the U.S. as she should be. That may well change with the release of The Newest Sound You Never Heard, compiled from recordings captured during the 1966 and 1967 European tours by Belgian radio and television station VRT. The previously unreleased tracks on this two-disc set nearly double the amount of available recordings from this unique duo.

Lee and Blake’s ideosyncratic style is immediately apparent from the outset, as they shape-shift through a wide range a repertoire. There are jazz standards and American Songbook selections such as Cole Porter’s “Night and Day,” Billy Strayhorn’s “Take the A-Train,” Gershwin’s “The Man I Love” and Rodgers & Hammerstein’s “My Favorite Things” (with additional lyrics by Lee). They also venture into pop with the Beatles “A Hard Day’s Night” and Bob Dylan’s “Mister Tambourine Man,” put a new twist on Ray Charles’ “Hallelujah, I Love Him So,” and pay homage to Billie Holiday on “Billie’s Blues.”  Rest assured that none of these interpretations sound quite like anything you’ve heard before – in a good way! Lee has been cited as one of the free jazz era’s most innovative vocalists, and regularly demonstrates her ability to take acrobatic leaps with great precision, plumb the emotional depths of a song, and change timbre on a dime from soft and breathy to harsh and demonstrative. It’s hard to imagine a more ideally suited accompanist than Ran, who charts his own course but never falls out of synch with the unique tonal portrait the two strive to create. Following is a rare TV clip of a 1963 performance of “Something’s Comin;” the song is also featured on the album:

Many thanks to A-Side Records, the Ran Blake Foundation, the New England Conservatory (where Ran has been on the faculty for over 50 years), and the VRT-Archive for making this compilation possible. I, for one, was not familiar with the work of Jeanne Lee and Ran Blake, and have spent a very enjoyable afternoon discovering their unique musical interpretations.