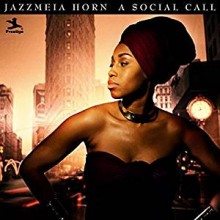 After winning the Theonious Monk Institute International Jazz Competition in 2015, vocalist Jazzmeia Horn certainly validated the name assigned by her prescient jazz-loving, church musician grandmother. On her stunning debut recording, A Social Call, the Texas-born singer likewise demonstrates a maturity that belies her age, steeped in the spirit of her idols Sarah Vaughan, Betty Carter, and Abbey Lincoln.  Horn’s familiarity with jazz vocalists and techniques of the 1950s and ‘60s is showcased throughout the album, but this is not a stroll through memory lane by any means. She is equally comfortable with R&B and gospel music, bringing plenty of contemporary influences to her unique interpretations of the classics.

The album takes its title from the song penned by Gigi Gryce in the 1950s for Betty Carter. Horn excels in this conversational style, creating an extremely fast and nimble arrangement with a teasing tone that keeps the rhythm section on their toes (Victor Gould on piano, Ben Williams on bass, and Jerome Jennings on drums). But the title also reflects Horn’s concerns about current events: “These are not good times. This album is a few things—it’s a call to social responsibility, to know your role in your community. It’s about being inspired by things that happen in your life and being able to touch others.”*

Delving into the very roots of black music, Horn uses spirituals as a source of inspiration, reflecting faith, resistance, protest, and resilience. One of the album’s highlights is a 13 minute medley that melds Oscar Brown Jr.’s “Afro Blue” with Horn’s original poem “Eye See You” and the traditional spiritual “Wade in the Water.”  Opening with over three minutes of primal vocalizations based on West African sounds, the track gradually shifts in space and place, taking listeners on a journey from the motherland to an all-too-familiar present day soundscape. Over the wailing of sirens and chanting of protestors, Horn’s intense poetry speaks of “blood on the pavement, brothers on the corner shackled and chained, stopped and frisked.” As she transitions into an emotionally charged rendition of “Wade in the Water,” one can’t help but recall Billie Holiday or even Nina Simone, who could turn any song into social protest.

Another montage blends an unembellished version of “Lift Every Voice and Sing” (aka the African American national anthem) with the classic Bobby Timmons’ song “Moanin” which shows off Horn’s scatting technique, extensive vocal range and command of different styles. The band also gets a workout, with solos by trumpeter Josh Evans and bassist Ben Williams.

The remainder of the album mixes jazz classics such as Johnny Mercer’s “I Remember You” and Betty Carter’s “Tight” with jazz-tinged R&B standards. Particular favorites include Horn’s renditions of “Up Above My Head” (Myron Butler’s arrangement) and the Rose Royce Carwash classic “I’m Going Down” that concludes the album.

One fact is obvious from Jazzmeia Horn’s debut album: this woman can sing! A talent like this doesn’t come along very often, and I can’t wait to hear what the future will bring.