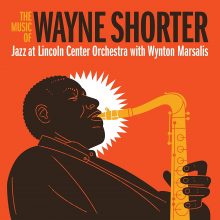 Wayne Shorter, one of the most prominent saxophonists and musical figures of our time, hardly needs an introduction. He is an 11-time Grammy Award winner, Lifetime Achievement Award recipient, and holds an extensive discography which includes over twenty albums as a bandleader.  For this special album, Shorter teams up with the Jazz at Lincoln Center Orchestra led by Wynton Marsalis to present The Music of Wayne Shorter.

This release is the product of three nights in May of 2015, recorded live at the Lincoln Center’s Frederick P. Rose Hall. Shorter’s original compositions are featured, the majority written early in his career from 1959-1966. This compositional period made a great impact on the contemporary jazz world, and tunes featured from this era include “Yes or No,” “Hammer Head,” “Contemplation,” “Lost,” “Teru,” and “Mama “G”.”  Other tunes such as “Diana” (from his Native Dancer album), and “Endangered Species” and “The Three Marias” (from his Atlantis album), were composed during Shorter’s later fusion years. All of these tracks have been arranged into a big band setting by various members of the Jazz at Lincoln Center Orchestra to offer a new view into the sensational music of Wayne Shorter.

The two-disc album opens with “Yes or No,” one of Shorter’s most well-known tunes originally from the 1964 album Juju. Set by Victor Goines, this new version has a lush, slow opening with beautiful harmonies that feature Shorter on tenor saxophone. On this track, we also hear stunning solos from Wynton Marsalis on trumpet and Dan Nimmer on piano. The band then transitions into “Diana,” arranged artfully to feature beautiful big band moments contrasting with smaller individual sections. Next is a swinging rendition of “Hammer Head,” followed by an introspective “Contemplation” and Shorter’s famous “Endangered Species.”

The second disc opens with Shorter’s “Lost,” featuring a colorful new arrangement of the classic piece with melodic wind and brass lines. We reach a deep swing in the next track, “Armageddon,” followed by “The Three Marias” and “Teru.” The album concludes with a rousing version of “Mama “G”” that gives multiple members of the orchestra a chance to improvise.

The Music of Wayne Shorter is masterfully arranged and orchestrated album that features the Jazz at Lincoln Center Orchestra at their finest with a living legend of our time. Shorter’s music gets the recognition it deserves, spun off in new ways that will continue to imagine and inspire.