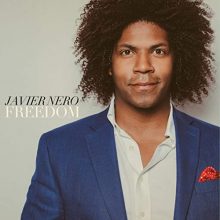 The winner of multiple prestigious jazz trombone competitions and recipient of a Ph.D. from Frost School of Music at the University of Miami, Dr. Javier Nero appears more than ready to present his debut solo album, Freedom. The title, he explains, reflects the very essence of jazz, as well as “the beauty that can be created by learning from and appreciating disparate cultures.” Nero draws upon his own multi-cultural ancestry and extensive training as a jazz and classical musician, as well as his experience as a member of the Haitian band Klass, to seamlessly incorporate elements of multiple genres across the 12 tracks of the album. Joining Nero in the ensemble are Tom Kelley (sax/flute), Melvin Butler (tenor/soprano sax), Jean Caze (trumpet/flugelhorn), Tal Cohen (piano), Dion Kerr (bass) and Aaron Kimmel (drums).

A talented composer, Nero wrote and arranged the works on this project at various points during his career, some while studying at Julliard, and others during his time in Miami. Opening with “Double Vision” featuring guest artist Brian Lynch on trumpet and flugelhorn, Nero sets a fast and furious pace. Not only do the horns stay nice and tight, but the entire ensemble virtuosity is on display, including stellar solos from Cohen and Kimmel. Nero takes the lead on “Cachaça,” featuring an extended trombone solo with an Afro-Latin twist and contributions from three notable guests: percussionist Murphy Aucamp, vibraphonist Kyle Athayde and jazz guitarist Russ Spiegel. The relationship songs “I Tried So Hard” and “Discord” suggest the struggle and occasional dissonance of love on the wane, convincingly performed by vocalist Lauren Desberg with Nero on backing vocals. Earlier compositions such as “Crystal Lake,” featuring Lynch and Spiegel, reflect Nero’s academic experimentation with dense textures and orchestrations. Another notable track is “Just Let Go,” a lush, soulful duet between Nero and Cohen.

The title track, “Freedom,” is indeed free of the constraints of a single genre. Opening with a solemn “Intro” in the style of a four-part patriotic hymn, the work bursts into a complex and sweeping cinematic mix of jazz and soul anchored by African rhythms, perhaps depicting Nero’s own background as well as his struggle with a racially divided culture. As he explains, “I certainly do not believe my ancestors who fought for freedom and equality did so hoping to find themselves limited or forced to conform to myopic cultural norms.” Nero clearly triumphs, breaking these boundaries to present the most uplifting and emotionally charged track on the album.

Freedom is a stunningly mature and cohesive album that displays phenomenal musicianship from all members of the ensemble – an auspicious debut for Javier Nero!