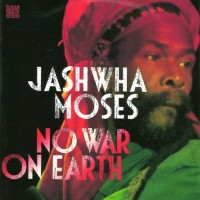 Title: No War On Earth

Sugar Shack’s mission to resurrect and promote the once-forgotten thriving Bristol reggae scene in England continues to be a monumental task that has culminated in a series of releases, bringing the English city into the general mindset as an area thriving with deep roots reggae. The dedication is partly seen from their rediscovery of Jashwha Moses, a musician from the late 1970s who was practically lost to the general consciousness. Painstakingly compiling rare material, their work eventually paid off in last year’s release of Joshua to Jashwha –30 Years in the Wilderness. This year, Jashwha Moses finally returns with No War on Earth, an album full of all-new material. The end effect is an album maintaining the old roots reggae feel whilst mixing with new and creative musical ideas.

As you get deeper into No War on Earth, you begin to wonder just how Jashwha had been forgotten in the first place. “Good Over Evil,” with anti-racism lyrics given further strength through a thick, dark sound that is only exemplified by the dub version that follows. The attention to detail in classic roots reggae is just as present in “No Weep” and “No War,” but Jashwha has a talent for expanding beyond tradition. I can only describe the track “Power Crazy People” as robotic dub; Jashwha manipulates his voice over multi-layered instrumentation and effects that sound practically haunting in the best way possible. The following track “Steel (Version)” only makes it better, as the same modifications to Jashwha’s voice are complimented by a strong driving beat and staccato moans that sound as though the song is a mash-up of roots reggae with Herbie Hancock’s “Watermelon Man” off Head Hunters.

While Jashwha Moses effortlessly preserves the traditional roots reggae sound, his ability to expand to incorporate new and interesting sounds in the music sets him apart from others. With No War on Earth, the revival of Jashwha Moses, and in a greater sense the Bristol reggae scene, has begun.