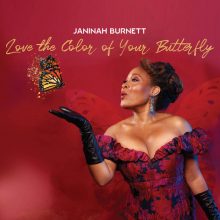 World-renowned soprano Janinah Burnett, known for her performances on Broadway as well as the Metropolitan Opera, is releasing her debut studio album, Love the Color of Your Butterfly. Classical operatic themes combine with a multitude of styles, such as jazz, blues, and spirituals, coming together to showcase both Burnett’s incredible versatility as well as the influences that shaped her into the talented and expressive musician she is today: “When the time came for me to make a body of work that represented my deepest artistic desires, I took an inventory of my musical influences and creations and came up with a concept that blended my past with my present.”

Grammy award-winning drummer and Burnett’s longtime friend Terreon “Tank” Gully is the producer of this project, and the amazing collaborators that helped bring the album to life include artists such as organist Sullivan Fortner, pianists Keith Brown and Christian Sands, bassists Luques Curtis and Ben Williams, and vocoder player Casey Benjamin. All of these contributors bring their own talents, thoughts, and experiences, combining together into artistry that beautifully expresses love and desire in a multitude of ways.

Love the Color of Your Butterfly pushes boundaries and transcends genres, uniquely and artfully showcasing emotional expression in a fashion hard to find elsewhere. This thirteen-track album features beautifully inspired and creative arrangements of well-known classical repertoire from some of the world’s greatest composers, including Puccini, Bizet, and Gershwin. The “emotional core” of the album, as the press release describes, is a suite of Duke Ellington’s songs, including two from his Sacred Concert recording series and a jazz rendition of “In a Sentimental Mood.”

The second track, “What Is This Thing Called Love,” is another jazz take on a classic, experimenting with Cole Porter’s popular standard, in addition to the inserted segments of “Habañera” from Carmen. “E Lucevan Le Stelle,” from Puccini’s Tosca, begins with a gorgeous piano solo that stays true to the original composition, before subtlety introducing drum set to transition the tone to a beautiful hybrid between jazz and classical, a hybrid Burnett refers to as ‘clazz.’ Gospel elements can be heard in “Creole Girl” (from Leslie Adams’ Night Songs song cycle) and “Someday We’ll All Be Free” (Donny Hathaway), while the funk vibes come through on the hypnotic arrangement on Sade’s “Kiss Of Life.” Her stunning version of “Keep Your Eyes on the Prize,” accompanied by bassist Ben Williams and Terreon Gully on vocals and tambourine, is another highlight. Closing the album is a rich and passionate rendition of Fats Waller’s “Honeysuckle Rose,” the first solo song Janinah performed with the vocal jazz ensemble as a student at Hamilton High School.

Burnett’s Love the Color of Your Butterfly is a fantastic exploration of classical, jazz, and the many other genres in-between. From oratorios to jazz standards, art song to funk, Janinah Burnett has masterfully executed the unification of musical concepts in a very entertaining and inspiring way. Burnett’s ‘clazz’ allows for such a large variety of emotional expression in music, helping her express ‘love’ in such a large variety of forms, making it the perfect Valentine’s Day album for classical and jazz lovers alike.