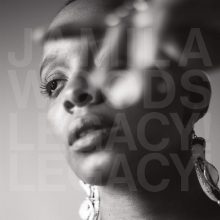 Chicago native and Brown University graduate Jamila Woods has released yet another impactful album that both celebrates Black culture and humanity. Legacy! Legacy! “highlights legendary artists of color, spanning disciplines, genres, and decades—[including] Zora Neale Hurston, James Baldwin, Frida Kahlo, Eartha Kitt, Miles Davis, and Jean-Michel Basquiat.” Woods honors each of these artist as ancestors, giving praise to them for being examples of how to unapologetically navigate life as a person of color. She also uses their lives and works as a way to discuss black life with an emphasis on Black feminism, Black identity, Black relationships, Black Rage, self-love and other sociopolitical issues found in Black communities.

Woods begins the album by giving tribute to Betty Mabry Davis, an unsung funk music pioneer and a music influencer who was briefly married to jazz musician Miles Davis from 1968-69. During that time Betty influenced many of Miles’ works such as the Bitches Brew album, and introduced him to the music of Jimi Hendrix and Sly Stone who were innovators of some of the hottest music at that time. Betty would go on to break down barriers in rock, R&B, and funk as a Black woman and musician, but she never achieved mainstream success and was often criticized for her hypersexual behavior. As Woods sings on “Betty,” she finds both catharsis and validation for the audacity to be different without compromise: “I am not your typical girl…throw away that picture in your head.” Woods also includes the song “Miles,” calling out his hypocrisy for criticizing Betty when he too was trying to avoid being placed in a box as both a musician and a human being.

“Muddy” is another song on the album about both Black joy and about Black rage. This tribute to Muddy Watters, who Rolling Stone magazine called “the man that launched a thousand bands,” takes issue with the appropriation of Black music. Woods says, “They can study my fingers… they can mirror my pose;” but they only want the product they don’t want the process that brought him and other Black musicians to this sound being created. As the famous quote goes, “Everybody wants to be us but nobody wants to be Us.”

Legacy! Legacy! is full of many discussions about real Black experiences and how they are lived. It is an album that should be enjoyed by people everywhere not just because the music is amazing but because it is the beginning to many conversations about Black music and humanity. Jamila Woods has created nothing short of a classic piece of musical art.