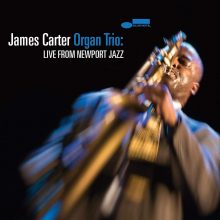 Saxophone virtuoso and Detroit native James Carter just released his Blue Note label debut, James Carter Organ Trio: Live From Newport Jazz. This album arrives nine years after the last album with his organ trio, At the Crossroads (2011), and his acclaimed orchestral collaboration with composer Roberto Sierra on Caribbean Rhapsody (2011). Carter’s recording of his live performance at the 2018 Newport Jazz festival explores the music of gypsy jazz guitarist Django Reinhardt from the perspective of Carter’s soul jazz, funk and R&B organ trio. Joined by longtime band members, Hammond B-3 organist Gerard Gibbs and drummer Alexander White, Carter takes us through an “exercise in musical transformation,” or as he says, “a willful attempt to urbanize Gypsy jazz, if you will.”

Carter has always loved the soulfulness of organ trios, explaining that those sounds were “always in the background” growing up in Detroit. According to Carter, “You’d hear Jimmy Smith while somebody’s passing the baked beans and the ribs and all that other good stuff.” He continues, “The organ has always been a part of the African-American Diaspora coming up through the spirituals and on into soul, neo-soul. It’s always been an integral part of the soulful landscape.”

Live From Newport Jazz opens with a medium-tempo swing rendition of Reinhardt’s balladesque “Le Manoir De Mes Reves,” incorporating blues vocabulary, saxophone growls, and call-and-response melodic exchanges between Carter and Gibbs. “Melodie Au Crepuscule” follows with a melodic organ prelude that slowly transitions into a funky groove that is mellow, but yet still in the pocket. Carter continues his musical interpolation as he inserts “Anouman” and “Fleche d’Or” into R&B and funk-influenced grooves. Another traditionally known ballad, “Pour Que Ma Vie Demeure,” retains the slower tempo of the original tune; however, Carter and Gibbs perform melodic riff-like solos almost as if they are ‘testifying’ musically, creating that participatory engagement with the audience. Finally, the gypsy waltz “La Valse Des Niglos” (a tune associated with Reinhardt, but written by Gusti Malha), finds itself superimposed on top a groove that is reminiscent of John Coltrane’s “My Favorite Things,” and features a superb rhythm, dare I say melodic, solo over the song form by White.

James Carter’s Live From Newport Jazz is both adventuresome and groovy—this is a must have for all fans of organ trios.