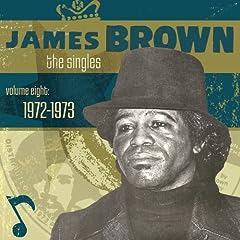 –
–
Reissues such as James Brown’s The Singles, Vol. 8, 1972-1973 are not for the casual listener.  Sequenced chronologically, with many tracks broken up into separate parts (replicating the two sides of a 45 rpm single) and others presented in their original mono mixes, such reissues assume an almost scholarly interest in the artist.  That said, if any figure in American popular music is worthy of this obsessive treatment, it’s James Brown.

This volume, covering Brown’s post-King, early Polydor years, continues the pattern established in the previous volumes in the series: extensive, well-researched liner notes with copious photographs; complete discographical information including personnel, recording, release, and chart data; fresh remasterings of the single mixes; knowledgeable notes (here by Alan Leeds), and enough rarities (including canceled singles and alternate, UK-only tracks) to make the set especially attractive to collectors, JB fanatics, and libraries.  That this documents the beginning of the end of Brown as a top-selling artist does not necessarily diminish its importance.  Though only one single in this set reached the top 20 on the pop charts and some of the song choices — particularly Hal David and Burt Bacharach’s “This Guy–This Girl’s In Love” and the Beatles “Something” — seem at first blush to be ill-suited to the James Brown style (the David/Bacharach cover is particularly wretched), there are enough fascinating nuggets here to warrant closer examination.  The aforementioned “Something,” for example, never appeared on any James Brown LP, and its transformation into a moody, mid-tempo soul groover works far better than one might reasonably expect.

By this point in his career, Brown had settled into some predictable patterns.  There are ballads with strings (“Nothing Beats A Try But A Fail,” “Woman”), hard-funk numbers that had long dominated Brown’s output (“Pass The Peas,” “Giving Up Food For Funk,” “I Got Ants In My Pants”), a variety of remakes, and swingers hearkening back to his earlier R&B days (“Honky Tonk,” “If You Don’t Get It The First Time”).  But there are also atmospheric, jazzier pieces, enabled in part by Brown’s move to the New York City-based offices of the Polydor label, his collaborations with newcomer Dave Matthews and old standby Fred Wesley, and his growing interest in both social causes (“King Heroin”) and soundtrack music (singles taken from the soundtracks to Black Caesar and Slaughter’s Big Rip-Off).  A number of these efforts utilize top-flight session players — Richard Tee takes a cooking organ solo on “I Know It’s True” and Buster Williams’ acoustic bass line on “Sportin’ Life” transforms a simple funk riff into a sophisticated jazzman’s theme and variations—to supplement the efforts of the post-Collins-brothers-but-still-crisp J.B.’s.  James Brown the instrumentalist also takes a couple of star turns: there are typically off-kilter organ solos scattered throughout, a weird but fun scat vocal/piano solo on “Like It Is, Like It Was,” and a surprisingly effective, thumping turn on the drummer’s throne propels his cover of Herbie Hancock’s “Watermelon Man.”

In all, the period covered by this set finds Brown looking for ways to, if not surpass his earlier heights, at least to remain relevant to an audience becoming more political (and, subsequently, supremely ticked off at Brown’s endorsement of Richard Nixon in 1972) and increasingly attracted to funk-rock hybrids like Funkadelic.  That the quality of the music here is, on the whole, as strong as it is proves that the Godfather of Soul wasn’t finished yet, and Hip-O Select deserves great credit for exploring James Brown’s singles releases in such detail.  I, for one, am anxiously awaiting further entries in this valuable series.