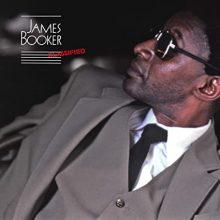 As part of Rounder Records’ 50th anniversary celebration, Craft Recordings is offering this remixed and remastered vinyl reissue of Classified, an unjustly overlooked 1982 release by New Orleans keyboardist James Booker, the iconoclastic disciple of the legendary Professor Longhair. On this record Booker performs an eclectic variety of songs, including tunes by R&B legends like Titus Turner, Fats Domino, and Lloyd Price. But he also covers “Hound Dog” (the Leiber & Stoller classic made famous by Big Mama Thornton and later by Elvis), the jazz standard “Angel Eyes,” the 1926 pop standard “Baby Face,” as well as the country classic “King of the Road” and two originals, particularly the scintillating “Three Keys” that concludes the record. Yet in spite of these disparate song sources, it all comes out sounding like Booker thanks to his inimitable musical talent and force of personality.

Legendary New Orleans saxophonist Alvin “Red” Tyler contributes on most of the tracks. It’s amusing to hear how Booker changes the lyrics of “King of the Road” so they’re about weed instead of tobacco. All in all, a most entertaining release from the late great Booker. Great New Orleans music is like an anti-depressant, especially relevant in these times. The brief “Madame X,” credited to James C. Skinner, is apparently Frank Skinner’s title song to a Lana Turner noir film.  According to the liner notes: “Alternately titled ‘Swedish Rhapsody’ by Booker, it displays his love of light classical themes and his ability to straddle European harmony and the rococo ornamentation of much of New Orleans piano music.”

Additionally, it seems that Booker may well be the origin of the term “Gonzo,” the title of his hit single (not included on this disc), most famously applied to the writing of notorious “Gonzo” journalist Hunter S. Thompson, who was reportedly a fan of the song in the early 1960s. Booker’s burgeoning career was further advanced when he caught the ear of the renowned Polish piano virtuoso Arthur Rubinstein in 1958. “I could never play like that; not at that tempo,” Rubinstein told the New Orleans-based Times-Picayune. For more information about this American genius, please consult the feature-length documentary, Bayou Maharajah: The Tragic Genius of James Booker.

Classified is a worthwhile addition to any well-stocked American music library.