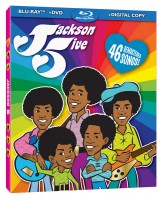 To offer some background, I enjoy collecting Jackson 5 memorabilia, so when it was announced that the complete animated series would be released on DVD, I knew my days of watching episodes of this cartoon on Youtube were over.  When it was released in stores I rushed over to Target to purchase a copy, assuming there would be one available for me.  You would think a DVD collection like this would be the last item to sell out in a Target on the north side of Indianapolis, but it had! I was in possession of the last copy available that evening, and a portion of my childhood was restored that night.  Anyone who was a Jackson Family fan growing up in the ‘90s may have come across reruns of this cartoon on VH-1. Catching these episodes (if you woke up early enough) on a weekend morning was a treat because they featured five black boys going on adventures and randomly performing songs with lyrics that are easier to remember than to forget.

Jackson 5ive: The Complete Animated Series is the perfect time capsule for those of us not alive when the cartoon series original aired in the early 1970s.  Whereas conversations today are about global warming and drones in the Middle East, Jackson 5ive documents a time when people debated the preservation of our forests and young men drafted into the military (e.g., Pinestock U.S.A. and Drafted).  The first five (no pun intended) episodes did a fine job of including all of the brothers in the storylines equally; however, across all 23 episodes more favor Michael as the main character and place his brothers in supporting roles, especially in fantasy themed episodes inspired by Cinderella (Cinderjackson), Alice in Wonderland (Michael in Wonderland) and The Wizard of Oz (The Wizard of Soul).  Unfortunately, the episodes become redundant over time with cheesy villains who are driven by greed (ironic considering this show was created to further capitalize on the Jackson family), as well as lazy plots that benefitted largely from the hipness of the brothers in strong contrast to the more conservative nature of the adults portrayed in the cartoons.

Following is a trailer for the DVD:

To their credit, directors Arthur Rankin, Jr. and Jules Bass, along with Motown, did their best to appeal to the masses by giving fans a cartoon show about one of the biggest bands post-Beatlemania.  The animation is not top notch and it doesn’t take long to discover this is a problem with the series; it should also be noted that the Jackson 5 did not provide the voices of their animated counterparts.  Whether or not you enjoy the cartoons, stay for the musical interludes featuring 46 songs from the albums Diana Ross Presents the Jackson Five, ABC, Third Album, and Michael’s solo albums Got to Be There and Ben. If you have a parent or relative who grew up with the cartoon series, this DVD is the perfect piece of nostalgia that can be shared with them, because the Jackson 5 and their music are timeless. For many of us, these were the first songs we learned to sing by heart.