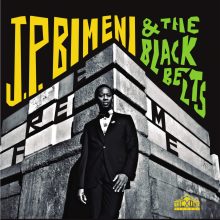 Burundian-born J.P. Bimeni is no stranger to tragedy; a descendent of the Burundian royal family, he was forced to flee his native country at age 15 during the 1993 civil war. After surviving the mass murder of his classmates, a gun shot in the chest, and poisoning by doctors, Bimeni was miraculously able to escape to the UK as a refugee. Despite the horrific events that he lived as a teenager, Bimeni has channeled his experiences with life and loss into his debut album Free Me.

Paired with The Black Belts, a 6-person funk group from Spain, Bimeni sings in a way that embodies the hope that he clung to during his near-death experiences in Burundi. In the debut single “I Miss You,” Bimeni’s gritty, soulful vocals make for a heartfelt ballad that instantly resonates with listeners. Other songs like “Honesty Is a Luxury” are more funky, while tracks like “Don’t Fade Away” are bold and empowering.

For J.P. Bimeni, music is more than a simply hobby or passion—it’s a way to survive: “When I sing I feel like I’m cleansing myself; music is a way for me to forget.” After living a life that would cause many to see the world as full of hate, Bimeni inspires listeners with his infallible positivity and demonstrates the therapeutic power of music.