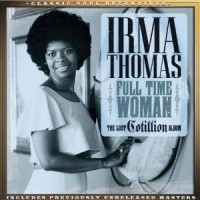 In 1960, Irma Thomas came on the scene with her bold debut single, “You Can Have My Husband (But Don’t Mess with My Man).” The record quickly gained momentum, reaching the number 22 spot on Billboard’s R&B chart. Her career was on the move and she recorded with several record labels including Ronn, Bandy, Minit, Chess, and Cotillion, a subsidiary of Atlantic Records. This is where Real Gone and SoulMusic Records founder David Nathan enter the narrative of Irma Thomas’ career. Full Time Woman: The Lost Cotillion Album is a collection of recordings from her stint with Cotillion, including the only two recordings ever released from that label: “Full Time Woman” and the “B” side, “She’s Taken My Part.”  Uncovered by Nathan during vault research in 2005, this compilation acknowledges the 13 previously unreleased tracks from Cotillion sessions that took place between 1971 and 1972, bringing all of these lost recordings together and giving more insight into the career of the New Orleans Queen of Soul.

Though the compilation consists of mostly original material, the highlights are the four recordings that are actually covers of previously recorded songs. “Fancy,” the first of the covers, was originally recorded by pop/country singer Bobbie Gentry in 1970. Here, however, Thomas transforms the song with a more intense rhythmic drive. “Time After Time,” a standard interpreted by many, is reinterpreted with a driving triple meter that gives Thomas just enough room to soulfully and expertly maneuver through each phrase. She lights a fire under “Turn Around and You,” originally recorded by Dee Dee Warwick, transforming it into an up-tempo, almost racing, love declaration. Lastly, she takes on another country cover, “Tell Me Again,” in which she carefully inserts her own soulful flavor.

Full Time Woman: The Lost Cotillion Album highlights a brief moment in Irma Thomas’ career, a moment in time that until now has not been fully explored, and will be an important addition to the collection of longtime fans, as well as an excellent introduction to those who may not be aware of Irma Thomas, her career and her music. Liner notes by David Nathan that recount his personal odyssey in search of these tapes add considerable depth to the story.