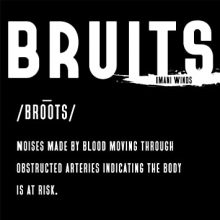 The acclaimed Grammy®-nominated woodwind quintet Imani Winds have released their latest studio album, Bruits. Composed of the talented artists Brandon Patrick George (flute), Toyin Spellman-Diaz (oboe), Mark Dover (clarinet), Jeff Scott (French horn), and Monica Ellis (bassoon), Imani Winds delivers a provocative commentary on the issues that have, and continue to, plague our country. Elucidated by the metaphorical title, “Bruits,” a medical term for an abnormal sound generated by blood flow through an obstructed artery, this album utilizes three inspiring works to describe our ongoing social and political climate, reflecting on the turmoil and strife within our country in an effort to bring about beneficial change before the damage becomes irreparable. Additional featured performers on the album include Grammy® award-winning pianist Cory Smythe, Metropolitan Opera National Council & Operalia award-winning soprano Janai Brugger, and scholar and narrator John Whittington Franklin.

Three powerful contemporary works are featured, beginning with the titular composition Bruits. As the press release states, “Bruits was written during the time of the George Zimmerman trial for the killing of a young black man named Trayvon Martin and refers to the blockage of justice inherent in the “Stand Your Ground” law.” Composed in five movements by pianist and composer Vijay Iyer, the jarring time signatures, shifting rhythms, gripping harmonic textures, and spoken words are just a few of the devices used to illustrate a difficult and heartbreaking journey that encapsulate societal issues, such as racism and armed violence. For instance, the fourth movement “Flocks” experiments with tension through sustained notes and shifting tones, building up to the words of Lucy McBath, whose son Jordan Davis was shot and killed ten months after Trayvon Martin while he sat in a car at a gas station with a friend. Such a unique mix of musical elements allows for emotional evocation that is difficult to come by in the medium of music.

The Light Is The Same, composed by Indian-American composer Reena Esmail, is the second work in the album. This track utilizes varying intonation and tonal layering, depicting two very different Hindustani raags, Vachaspati and Yaman, blending to beautifully illustrate how contrasting ideas can come together in harmony.

The final piece, Sometimes, is a three movement composition written by Frederic Rzewski in tribute to Dr. John Hope Franklin, a Black historian best known for his writings that detailed the evolution of the social and economic freedoms of African Americans. The composition was commissioned by Duke University in 2015 as part of its centennial celebration of Dr. Franklin’s life, and features his son, John Whittington Franklin, as narrator. Additionally, the three movements are deconstructions of the spiritual “Sometimes I Feel Like a Motherless Child,” featuring the text from the poem “God to the Hungry Child,” sung by the talented soprano Janai Brugger.

Bruits is a compelling album that not only identifies the continuing inequities in our society but also provides meaningful and thought-provoking solutions in both unique and familiar ways. These works encourage diversification and edification in ways I haven’t experienced in a singular album, making Bruits an album I believe worth at least a few complete listens from beginning to end, in addition to sharing with your loved ones afterwards.