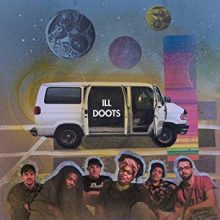 Over the summer, the Philadelphia hip hop collective ILL DOOTS released their self-titled album, Ill Doots. The ensemble—a group of artists, educators, and activists based in Philadelphia—is inspired by Minneapolis funk, classic rock, hip hop, neo soul, and “everything in between.” Since their early formation in 2009 at a dorm room jam session, the collective has released several albums, toured the U.S., and become a fixture on the Philly concert scene. Apart from their musical endeavors, ILL DOOTS has a community outreach program called the I Love Learning initiative that provides free workshops in schools, after school programs, churches, and community venues in Philadelphia.

Ill Doots includes several tracks that make you want to get up and groove, one of which is “Suddenly,” a smooth neo soul groove with a pseudo-reggae section featuring Khemist, Ron Draper & The Prof. Another foot-stomper is “Smile,” a disco-influenced groove that certainly invites the listener to dance and have fun. The collective most definitely gets down and funky on “Sheep,” using vintage synthesizers, drum machines, and electric pianos that pay tribute to the sounds of the funk greats. Last, but certainly not least, “Programming” has that sweet neo soul vibe that makes you bop your head automatically. I would be remiss if I did not acknowledge the rich vocal harmonies and the well-executed background horn lines on this album.

The contributions by each member of ILL DOOTS makes this album a well-organized music production. I recommend giving this a listen.