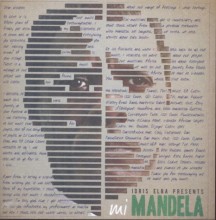 Fans of the HBO series The Wire will forever associate Idris Elba with his Stringer Bell character. It was Elba’s recent work on the film Mandela: Long Walk to Freedom, however, that served as inspiration for this project, and it’s not his first foray into music. A man of many talents, Elba has performed as a DJ, soul musician and rapper, releasing his own EPs and mixtapes, and also contributing to tracks by Jay-Z and Pharoahe Monch.

Mi Mandela, a tribute to Nelson Mandela, was “curated, written and produced” by Elba. After soaking up the music of South Africa during the filming of Mandela, Elba flew back a year later with a handful of musicians and producers, including Oliver Wright and the English musician known as Mr. Hudson. Once they arrived, South African hip hop and electronic musician/producer Spoek Mathambo hooked them up with other musicians, and the project was literally created in the studio over a four week period, followed by additional sessions in Mali and London.

The album opens with the uptempo club dance track “Aero Mathata,” sung by the Mahotella Queens with backing added by the female British string quartet Demon Strings. British R&B singer/actor Shaun Escoffery takes over on “So Many People,” a freedom song he performs with the GSI Choir. On the soulful ballad “You Give Me Love,” featuring Maverick Sabre, the Hammond organ and Futury History Brass Section provide a retro vibe. Sabre also offers a wonderful cover of “Home” by Mumford & Sons (the only track not written by Elba), drawing inspiration from three continents. African musicians take over on “Thank You for Freedom,” which features the traditional London African Gospel Choir punctuated by beats from Mash-O (a.k.a. Afro tech musician Lucky Mokobane).

British spoken word artist George the Poet (a.k.a. George Mpanga) is featured on two tracks: “One” with the Future History Brass Section and “Hold On” with backing vocals by Thabo and the Real Deal. In a departure from the rest of the album, American singers Cody Chestnutt and Audra Mae contribute vocals to “Tree,” which juxtaposes African-style guitar in the intro with a lush string section in the chorus.

Stating that he didn’t want this to be considered a vanity project, Idris Elba chose to be included on only one track, “Mi Mandela,” performing with the Djigui Choir and Mr. Hudson. The song, both sung and spoken, is an often humorous account of his work on the film and its reception (“how could Mandela be played by Stringer Bell?”). Another highlight is “Nothembi Jam,” featuring the Future History Brass Section with Nothembi Mkhwebane, the ‘African Queen of Ndebele Music,’ on guitar, isidonodono and impalampala. The album concludes with “Soldiers Don’t Back Down,” performed by Djatta Music, a Mali troupe originally created to promote disability awareness and fight discrimination.

For the majority of the album, this cross-continental collaboration works brilliantly, creating a unique blend of British and African artists, instruments and genres, while mixing the traditional with the contemporary. At present the album has only been released in the UK, but the CD is still available for purchase online and is also available for streaming via Spotify.