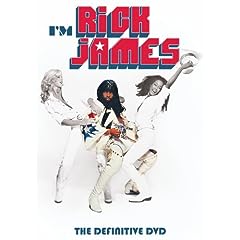 Rick James was a “bad boy,” an anti-hero who rebelled against societal norms by singing of the wonders of marijuana (“Mary Jane”), sex (“Give It To Me Baby”), and of “Super freaks.” This so called Definitive DVD can’t touch what the real Rick James represented live and in concert, it doesn’t even come close. Culled from various TV appearances on shows such as Don Kirshner’s Rock Concert, Soul Alive, Dinah, and Dick Clark’s New Year’s Rockin’ Eve, most of the “performances” are lip-synced, with James merely mouthing the words of the song while giving a subdued and controlled performance where he never lets his hair down and never breaks a sweat. Everyone knows Rick James wore his hair plaited with beads and braids, and when he preformed he sweated like someone poured a bucket of water on him.

James came to Motown in 1978 and released his first monster album Come Get It!, which had two mega hits including my all time favorite “You and I” and “Mary Jane,” which was a prelude to the formation of the Mary Jane Girls Band. James broke many cultural taboos by flaunting his extravagant lifestyle. As an icon of drug use and eroticism, he went further than anyone had ever gone before. A womanizer who by his own admission bedded “thousands” of women, James was also a heavy crack cocaine user who, by some reports, spent $7000 a month for five years on drugs. He made a living rebelling against the establishment by touting sex, drug, funk and roll. On I’m Rick James, however, it seems like society and TV not only tamed the notorious musician, but dammed near defunked the mighty self-proclaimed “king of punk funk.” In fact, during his performance of “Love Gun” on the Dinah show in 1979, Dinah introduces James as a “very nice guy.”

Still, if you are a true Rick James fan you will want to add this DVD to your collection for two reasons. The first reason is, of course, the music, because it’s all good; the second is for the visual images of a long gone creative music master. But again, I must say buyer beware because this not the “definitive” DVD and in most of the performances James is just going through the motions. There is no real fire or power in the delivery as you would expect from his soulful, funky live performances.

Some of the best performances, though I hesitate to call them that, are “You and I,” “Mary-Go- Round,” and “Fool on the Street,” all with thumping bass lines, hypnotic rhythmic grooves and funky percussive horn lines. Other good songs that either address or express his rebellious nature are “Give It To Me Baby” (which has a nice rock guitar solo), “She Blew My Mind (69 Times),” “Fire It Up,” and of course the ubiquitous “Super Freak,” which everyone knows MC Hammer covered as “U Can’t Touch This,” the biggest hit in the rapper’s short-lived career.

There are a few special treats in the “Bonus performances” section of the DVD. Once again, these are not live performances but Motown promotional videos, which give a deeper insight into the man and the song. Of special note is another renditon of “Standing on the Top,” this time performed with all seven of the Temptations, as well as additional performances of “You and I” and “Super Freak.”

Another one of my favorite songs performed on I’m Rick James is the autobiographical “Glow,” where James is in a dialog with his woman who talks about his drug and alcohol use and abuse. The woman says she can’t watch him throw his life away and self destruct. And he says “I don’t need anybody, I’m Rick James and I don’t need anybody,” all the while dinking from a fifth of Jack Daniels. Then he staggers out on the stage and falls flat on his face. The very same way he fell flat on his face in life. Art imitates life, and in 1993 James was sent to Folsom Prison until 1996, and on August 6, 2004, he died of a heart attack at the age of 56, although the autopsy report stated that he had Xanax, Valium, Wellbutrin, Celexa, Vicodin, Digoxin, Chlopheniramine, methamphetamine and cocaine in his system.

In the performance of the song “Big Time” Rick James sings, “I was born to funk and roll in the big time,” and he did for awhile. Therefore I still await the “definitive” collection of his work.