Hundred Watt Heart’s Turbulent Times is the first solo recording by “Captain” Kirk Douglas from The Roots. Joined by The Roots bassist Mark Kelley, the Hundred Watt Heart is a Black rock power trio rounded out by drummer Ricc Sheridan from the band Earl Greyhound (the three also perform together as The Dust Rays). Given the power trio theme, it is appropriate that this album was recorded at Jimi Hendrix’s Electric Lady Studios in New York. The eight tracks feature excellent songwriting and musicianship that is at times bare-bones rock and roll, and at other times well-produced pseudo-psychedelia. The entire band is first-rate, and Douglas is outstanding both as a vocalist and a guitarist. Perhaps most impressive is Douglas’s restraint as a guitar player. On tracks like “Uma” he demonstrates that he can play at a top-tier level when he wants to, but unlike some other highly technical guitarists, Douglas does not populate the entire album with flashy guitar licks. 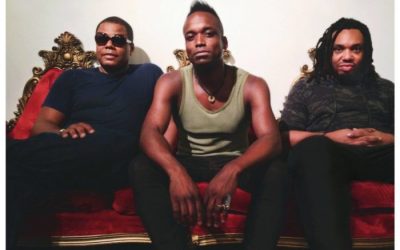 Douglas has cited numerous influences that span multiple genres—Prince, Living Colour, Parliament-Funkadelic, The Cure, The Rolling Stones, Fishbone, and Marvin Gaye. The main takeaway, though, is that like any great rock album, the listener hears the influence of multiple artists. “Little Friend,” which recounts an incident where Prince broke a guitar that Douglas had lent him on Late Night with Jimmy Fallon, has a very heavy 1980’s influence that points toward Andy Summers from The Police in the way guitar parts overlay one another. Harder rock tunes like “Uma,” “I Used to Be in the Circus,” and parts of “Turbulent Times” seem to reference power trios like King’s X and The Jimi Hendrix Experience. It is apparent that Douglas has done a great deal of listening over the course of his life, and on Turbulent Times he references a significant chunk of rock and roll history.

“Turbulent Times” and “Our Year,” the first and last tracks respectively, both begin with Douglas singing solo with acoustic guitar, but evolve into full band performances. The title track, which begins the album, is based around a bluesy, Hendrix-esque riff. After the full band comes in, Douglas punctuates the track with some nicely orchestrated guitar lines that overlay multiple fuzz guitar parts and feedback. “Little Friend” has a very radio-friendly feel to it, and it is arguably the highlight of the album with its punchy bassline, catchy chorus, and the long-sustained vocal harmony towards the end of the tune. The fade out and reprise at the end of “Easy” adds a nice psychedelic production touch to a song that gives the listener the feeling of floating in calm water. And the aforementioned “Uma” features blistering guitar playing, but it also serves as an example for any drummer of how to play with a guitarist. Sheridan does not merely play the beat over the solo; he is actively listening to and subtly punctuating every lick played by Douglas. All songs on this album have merit. It is not a record where there are one or two strong songs with a bunch of filler to take up space, making it a throwback to some of the great rock and roll albums in history.

Turbulent Times is an excellent outing. There is something here for almost any rock fan in that so many of rock’s subgenres are represented. The album will surprise anyone who thinks of “Captain” Kirk Douglas as merely a member of the Tonight Show Starring Jimmy Fallon house band. This is a complete rock and roll album that back in the days when people purchased records would have likely sold a significant number of copies. And for modern fans of physical formats, Turbulent Times is available on both clear and blue vinyl. In a time when fewer and fewer recordings feature three individuals playing their own instruments, this recording can best be described as “refreshing.”