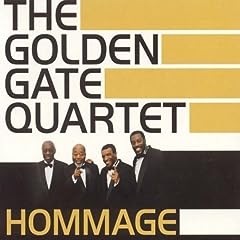 There have been many compilations devoted to the Golden Gate Quartet, one of the oldest and most beloved of all the jubilee/gospel vocal quartet groups, and the latest addition is the double disc Hommage released by Buda Records. Compiled and annotated by Christian Bonneau, the accompanying booklet is illustrated with many historical photographs and contains a chronological history of the group and its members, which have changed considerably over the 60 plus years of the group’s existence.  The set seeks to pay tribute to the various “Gates,” with particular emphasis placed on live recordings made in France, the group’s official home since 1959.

Though most historical compilations are arranged chronologically, Hommage begins in 1997 following the retirement of tenor Clyde Riddick, whose tenure with the group lasted over 50 years, from 1939-1994.  The opening track is a rendition of “Soon, I Will Be Done,” recorded at the St. Sermin cathedral in Toulouse, France in 1997. Ten additional tracks from this concert are interspersed throughout the set  and feature Frank Davis (1st tenor since 1995), Charles West (2nd tenor from 1934-39), Henry Owens, Willie Johnson, and Orlandus Wilson. tenor, 1995-1999), Paul Brembly (baritone since 1971), and bass Orlandus Wilson, one of the founding members of the group who died a year after this concert.

Over the course of the set, the tracks skip around in time, interspersing the earlier a cappella material with later songs accompanied variously by piano, guitar, and rhythm combo.  The Golden Gate Quartet’s first recording, their famous rendition of “Gospel Train” with a soaring tenor over syncopated vocalized “chugging,” is included on track 10. Recorded August 4, 1937  in Charlotte, North Carolina,  “Gospel Train” features  early group members William Langford (1st tenor from 1934-39), Henry Owens, Willie Johnson, and Orlandus Wilson. Other a cappella songs by this same group include an innovative version of the jazz standard “Dipsy Doodle” (one of the few secular arrangements on the set) and “Lead Me On and On” (from Jan. 24, 1938), “Let My People Go” (a.k.a. “Go Down Moses” from 1939), “Noah” (Feb. 2, 1939), and “I’m a Pilgrim” (Oct. 6, 1939).

After Langford was replaced by Clyde Riddick in 1939 the line-up was fairly stable for the next decade, except for some substitutions during WWII.  Hits from this era, all recorded stateside, include “Didn’t It Rain” from 1941;  a jazzy version of “Shadrack” along with “Run On,” and “Hush!” from 1946; and “Amazing Grace” and “I Want Two Wings” from 1949, among other favorites.  The final New York sessions on the set feature two more secular  arrangements from 1952, “Lover Come Back To Me” and “Careless Love Blues,” featuring pianist Conrad Frederick, a well-known New York session musician who also ad libbed during the 1949 sessions.

The remaining tracks on the set were all recorded in Europe between 1955-1997 and include material less generally available in the U.S.  Locations range from recording studios in Boulogne, Berlin and Paris to live concerts at various churches in France.  Several of their traditional numbers are reinterpreted, such as “Good News” and “Jericho” which are backed by a combo, and “Deep River,” which is accompanied by an unidentified church choir. These contemporary arrangements, though all well sung, lack the spontaneity as well as the rhythmic and stylistic variety of the earlier recordings by the group.

The set concludes with a seven minute history of the quartet narrated by Orlandus Wilson and recorded at his Paris home in 1980.  Though no new information is imparted, its nice to hear the Gates story in Wilson’s own words, even though he seems to be reading from a script and the narration is punctuation by songs and applause, which is often distracting.

This recent video compilation illustrates the style of the current GGQ:

Extensive liner notes are presented in French and English, but the translation is quite stilted and would have benefited greatly from a copy editor.  Though performers, recording dates and places are all documented at the end of the booklet, it’s a bit difficult to match them to the individual tracks since the order is not chronological.  If you’re a traditionalist, you’ll probably be better off purchasing compilations of the Gates’ pre-1950 recordings.  However, if you want a broad overview of the Golden Gate Quartet’s career and enjoy contemporary renditions of the classics, this set will deliver.