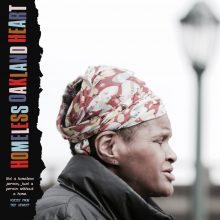 Every day brings more stories to light about the burgeoning number of homeless people throughout the U.S. Due to rapid gentrification and “hyper-capitalism” in Oakland, CA, the situation is especially dire. Homeless Oakland Heart, released to coincide with World Homeless Day, offers a collection of songs and stories recorded live on the streets of Oakland. This project from Grammy-winning producer and author, Ian Brennan, attempts to capture the “street” cred and raw-ness of the individual performers, with tracks “ranging from old school beat-boxing to free jazz guitar to ballads and electronica.” Despite their brevity, songs such as “Food Not Drugs,” “Money Honey” and “Sidewalk Cemetery” hit hard. The tenderness and vulnerability will certainly pull heart strings, but more importantly, Brennan seeks to humanize the homeless and alleviate suffering. Any and all profits will be donated to Coalition on Homelessness. A vinyl release is planned for Record Store Day on April 18, 2020.