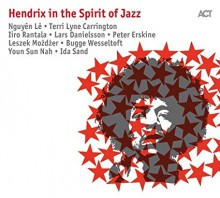 Title: Hendrix in the Spirit of Jazz

Hendrix in the Spirit of Jazz is a collection of Jimi Hendrix songs performed by various artists from Germany’s ACT label. Hendrix, who would have turned 75 in November shortly before this album was released, remains one of the most influential musicians of all time. His influence on electric guitarists is universally recognized, and the rare guitarist who is unaware of Hendrix has undoubtedly studied the playing of others who were influenced by him. Appropriately, this album features an obligatory guitar presence; however, it also demonstrates that Hendrix’s influence spans beyond his chosen instrument.

The opening track is a solo piano performance of “Angel” by Norwegian pianist Bugge Wesseltoft, which demonstrates Hendrix’s talent as a composer. Although music history focuses on Hendrix’s influence upon the electric guitar, his songs are able to transcend genre and instrumentation. This track, along with the album as a whole, proves that Hendrix tunes are perfect vehicles for jazz improvisation and experimentation.

Highlighting the strength of Hendrix’s songs—and their ability to remain stylistically ambiguous—are two versions of “Little Wing.” A jazz trio, featuring what is arguably the best playing on the recording by Finnish pianist Iiro Rantala, performs the first version. Rantala plays over the original chord changes during his solo, but he weaves intricate jazz lines over them to create a harmonic palette that should interest any jazz fan. The other version of “Little Wing” is closer to the original in terms of instrumentation. French guitarist Nguyên Lê delivers a remarkable performance in which he channels Hendrix’s technique, while simultaneously sounding a bit like fusion guitar icon Allan Holdsworth.

Lê is featured again on “1983… (A Merman I Should Turn To Be),” along with American musician Terri Lyne Carrington on drums and vocals. As the first female artist to win a Grammy for Best Jazz Instrumental Album, Carrington’s presence on this compilation is fitting in that she parallels the innovative, groundbreaking spirit of Hendrix. This cover of “1983,” which is one of the most sonically experimental tunes ever recorded by Hendrix, is one of the standout tracks on this album. The musicians capture the essence of the original, yet they do it uniquely in a jazz fusion setting.

Though all of the tracks have something different to offer, there are aspects of a few songs that warrant mention. First, no other tracks are as captivating as the versions of “Voodoo Chile” and “Are You Experienced.” The former’s rendition by a jazz big band is refreshing, and the horn arrangements serve as another example of the versatility of Hendrix’s music. Similarly, “Are You Experienced” stands out for its cinematic arrangement performed by a symphony orchestra. Additionally, Marc Ribot’s reverb-laden guitar on “Drifting” is simply mesmerizing, and this song is accentuated by the presence of South Korean jazz vocalist Youn Sun Nah, who sings beautifully.

Despite the album’s title, Hendrix in the Spirit of Jazz is neither a straight-ahead jazz record nor does it contain typical cover versions of Hendrix songs. However, the potential listener should be assured that these tunes bridge the gap between the two styles well. Nguyên Lê provides quality guitar playing on four of the album’s tracks. He has enough stylistic similarity to Hendrix that he should appeal to those not yet indoctrinated into jazz. On the other hand, the presence of some monster jazz players should appeal to jazz aficionados. In particular, there are some phenomenal drummers on this album—Danny Gottlieb (Pat Metheny Group, Mahavishnu Orchestra), Peter Erskine (Weather Report, Yellowjackets), and the aforementioned Terri Lyne Carrington, who has played with everyone from Dizzy Gillespie to Herbie Hancock.

Hendrix in the Spirit of Jazz has certainly been produced in the spirit of Jimi Hendrix, who is quoted in the liner notes: “When I die, I want people to play my music, go wild and freak out and do anything they want to do.” His wishes have indeed come to fruition with this compilation of his music.