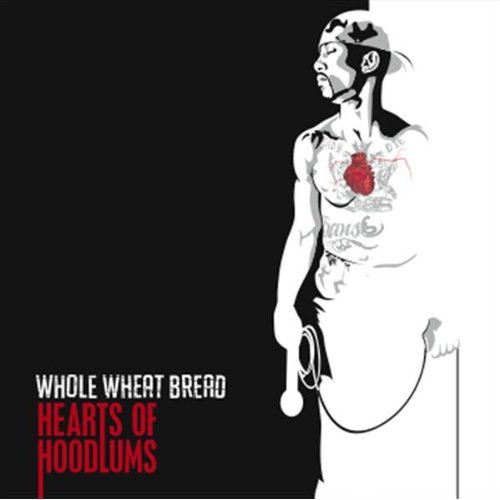 Whether you’re into rock, rap, punk, or crunk, Whole Wheat Bread is definitely a band to keep an eye on. Hailing from Jacksonville, Florida, and defining their playing style as “Dirty South Punk Rock,” Whole Wheat Bread formed in 2003 and released its first album, Minority Rules

in 2005.  The trio’s current manifestation consists of Aaron Abraham on lead vocals, guitar, and bass; Joseph Largen on vocals and percussion; and Will Fraizer on vocals and bass.  Fraizer played with WWB for less than a year before recording Heart of Hoodlums, but the group is already perfectly in sync and gives a tighter performance than most bands that have played together for years.  Although not listed among the primary performers, Travis Huff, producer, mixer, and engineer for the album, has also created some nice arrangements and synth tracks for “Bombs Away,” “Stuck in da Dark,” “Staying True,” and “Girlfriend Like This.”

Possibly due to the constant change in bass players since 2006, WWB’s three albums sound considerably different from one another.  Whereas their album Minority Rules had more of an off-the-cuff, fast-and-furious, classic punk feel, Punk Life

experimented with the heavier sounds of crunk and hip-hop.  Compared to these earlier works, Hearts of Hoodlums demonstrates an amazing amount of stylistic versatility.  Dirty south, crunk, punk, and hip-hop are definitely in there, but the band has added metal, alternative rock, and reggae to the mix.

The overall theme of Heart of Hoodlums also varies from WWB’s first two albums.  Although there are still a number of in-your-face songs about challenging the authorities and shaking up the social order, Hoodlums delves more into self-reflection.  A number of songs, like “Every Man for Himself” and “Stuck in da Dark” (featuring a guest performance by rap artist MURS) sing about feeling lost, trapped, confused, and seeking a sense of direction.  The lyrics aren’t heavy enough to weigh the album down, but they definitely can take on a more contemplative tone than the more standard punk and crunk fare from WWB’s previous albums.

“Bombs Away” is currently receiving the most attention from the online community and has over 2.5 million hits through WWB’s MySpace page and over 7,000 plays of the music video on YouTube.  Musically, “Bombs Away” draws from both rock and rap.  The style of the verses is vaguely reminiscent of Eminem while the choruses, featuring guest vocalist Mike McColgan of Street Dogs, sound more like Metallica or Korn.  The lyrics also shift between rap and rock, mixing reference to street violence (“don’t pop a cop”) with war references like “the shrapnel falls like stars and washes away who we are,” the latter of which sound much more like something you’d expect from a metal band.  The music video also contains war references and shows scenes of the band running through fields wearing army camouflage and touting military riffles.  For the most part, however, the action takes place in the “Duval County Veteran’s Hospital,” which look like part of the set for One Flew over the Cuckoo’s Nest.  In the video, Abraham daydreams about WWB staging a military coup against the all-white staff, which has just strapped him into a straight jacket and sedated him.  Given WWB’s struggles against the music industry’s tendency to pigeonhole black performers as rap and R&B artists, a story about black rockers resisting institutionalization by white authorities seems appropriate.

Another song with a strong online following is “Throw Yo Sets Up,” which welds a sort of happy crunk beat with lyrics about gang warfare.  The song also incorporates elements of reggae and Jamaican Patois in homage to Abraham’s Caribbean heritage.  “Girlfriend Like This,” which for some reason reminds me of a Smash Mouth song mixed up with an alma matter, is another popular track and tells about falling for that special girl and the joys of uninhibited sex.  Although part of my brain keeps telling me that I really should find “Girlfriend” offensive because of the lyrics, the other half seems to mock it by continually getting this extremely catchy tune stuck in my head.

There are several other solid songs on the album that haven’t attracted quite as much attention.  If you’re into more classic punk, “I Can’t Think” is a definite mosh pit starter.  Be forewarned, however, that it shifts to crunk toward the end.  Although WWB tells off listeners who think this is a hip-hop song, the lyrics and musical style of the crunk section may be too close to gangsta rap for many people.  Whether you’ll hear it as a novel twist or as an unwelcome intrusion on an otherwise fantastic punk piece depends completely on your tastes.

A number of songs on the album, while still punk, lean a bit more towards alternative rock.  “Lower Class Man” in particular has some crazy and irreverent lyrics lambasting the middle class.  If you’re into groups like the Dropkick Murphys, you’ll probably take an instant liking to this one.   “Every Man for Himself,” “Ode 2 Father,” and “Catch 22” use a similar musical approach, but the lyrics are lower key, even borderline somber.  Even more alternative is “Staying True,” a sentimental song about friendship that opens with soulful acoustic guitar and piano before abruptly shifting to a faster paced rock sound.  Although the use of this formula isn’t particularly unique to the current rock scene and the song would sound completely at home on a Green Day album, it’s flawlessly executed and demonstrates the WWB’s versatility.

According to Rob Fields, author of the Bold as Love blog on Black Rock, WWB also offers a great live show and treats its audiences to a mix of top-notch punk and playful humor.  After watching the band perform a nearly flawless set at the SXSW09 music festival in Austin, Stone from The Couch Sessions blog has predicted that WWB may just be the next Black Rock band to break through to the mainstream.

WWB is definitely a band that plays what it wants, when it wants, and genre boundaries aren’t going to stop it.  My only borderline negative comment about the CD is that it’s slightly cannibalistic.  Every song is extremely well-done, but most of them tend to remind you of songs by other bands.  There’s nothing particularly wrong with this.  If you’re really into a particular type of music, it’s always nice to have more of the same played by a great band, and WWB is definitely that.  Now that they’ve found their winning combination, it would be fabulous if the group pushed the envelope just a bit more.

Despite this minor issue, Hearts of Hoodlums is a fantastic CD and WWB is currently touring hard to get their name out.  If the trio can win over the fickle hearts and pocketbooks of music industry execs, Stone’s prediction may be prophetic.

Editor’s Note: This review is part of our ongoing examination of black rock in preparation for “Reclaiming the Right to Rock: Black Experiences in Rock Music,” a two-day conference organized by the Archives of African American Music and Culture to be held on November 13-14, 2009, on the Indiana University-Bloomington campus. Visit the conference website.