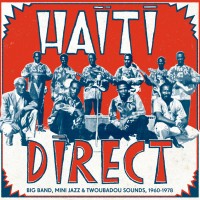 The musical atmosphere of Haiti is a veritable hodge-podge of  genres, influenced in part by the limitless possibilities of human creativity, but also through the realm of dictatorial politics. The layers of colonization, providing a mix of Spanish and African musical roots, are reworked through contemporary musics such as rock, jazz or pop music from France and other countries. The control of access to music was also a huge influence, especially in the second half of the 20th century, as the infamous Haitian dictator François Duvalier sewed seeds of an “authentic” Haitian culture through the folkloric “vodou jazz.” The global diaspora of music that found its way to this island within the Caribbean, while at times heavily politicized for nationalist purposes, nonetheless provided an outpouring of immense talent from several groups. The greatest period of creativity?, a time spanning almost two decades during the 1960s and 1970s, signifies a time of rich musical discovery, interpretation and reinterpretation by Haitian musicians. Although kept for the most part within the island itself, Strut has collected a fine assortment of tracks showcasing the Golden Age of Haitian music with their two-disc release Haiti Direct.

The beauty of Haiti Direct lies in the idea of familiar variety. This isn’t meant to say that the songs are instantly recognizable to an American audience. Rather, each track flows neatly and seamlessly into one another while at the same time highlighting the different influences and genres that have been incorporated into the country. One of the most common musical traits is the usage of merengue from nearby Dominican Republic. Spread extensively throughout the early 1950s by the radio station La Voz Dominicana based in Trujillo, merengue quickly became the music “of the people.” But while this may lead to the belief that merengue is solely a Dominican creation, Haitians would be heavily inclined to disagree. While the Dominican Republic regards merengue  as their national music, Haitians defiantly regard it as strictly Haitian. But this is for another time.

The Ibo Combo kick off the album with “Ti Garçon,” a mini jazz band tinged with local flavors of African rhythms and merengue. The punch of the brass section energizes while percussion provides strong and steady support with a helping of rhythmic variety. From there we hear tinges of surf rock and psychedelic influences through Les Loup Noirs’ “Pile Ou Face.” The intro feels like the start of a Ventures or Surfaris riff, and the decision to have a madman of an organist at the forefront was clearly a brilliant stroke.

As the album continues, the tapestry that unfolds to showcase the variety of musical influences is remarkable. On one song, you may hear a host of Afro-Latin influences combined with jazz; on another, a more rock-oriented sound from the United States or even a traditional folk song celebrating Lent. Strut  obviously devoted a heaping amount of love and devotion to the compilation of Haiti Direct, trying to cover as much as possible in such a varied and astounding two decades of music. For those wanting to discover the artistic beauty of an island that has endured centuries of pain and suffering, as well as individuals with an appreciation for Haitian music who want to find even more, this release is a perfect fit.