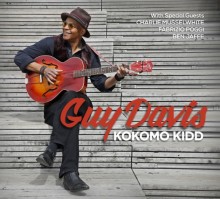 Guy Davis, the son of actor-activists Ossie Davis and Ruby Dee, is primarily known as a blues singer but his recent album, Kokomo Kidd, is inspired by or dedicated to his diverse heroes, including Woody Guthrie, Sonny Terry, Bob Marley and some of his friends.  Though the blues permeate each track, they come in and out of focus as Davis’s other influences weave throughout the album. This is Davis’s 17th album, and the first that he produced himself.  At times the instrumentals are layered a little too thick, but he takes the listener on quite a ride.  The cover art shows him playing guitar, but he also plays banjo, harmonica, keyboards, and percussion.  The CD comes with a lyric booklet, and each lyric is introduced by a dedication-explanation.

In the title track Davis narrates the (possibly made-up) story of Kokomo Kidd, a black Washington, D.C. coal delivery man who smuggles contraband into the White House, Capitol and Supreme Court with the day’s coal:  “Washington insiders want drugs and sex / It ain’t about who’s rich but who connects.” Ben Jaffe of the Preservation Hall Jazz band lends tuba to the track. Davis expanded on the political ideas of the song in a November 2015 interview on The Open Mind.

The other tracks are a mix of covers and originals, and none continue the political theme.  The covers include Bob Dylan’s “Lay Lady Lay,” sung in a gravely, elderly tone that turns the song a bit creepy.  This is one of the somewhat over-produced tracks, with Hammond organ and lots of string playing, but Davis’s vocals cut through despite the decrepit tone.  Willie Dixon’s “Little Red Rooster” features Charlie Musselwhite on harmonica and there is also an impressive electric guitar solo by John Plantania.  “Cool Drink of Water” features a soulful Christopher James on mandolin.  “Bumblebee Blues” recalls the art of the double-entendre in Delta blues—“Stung you early this morning, you been lookin’ for me all day long”—while John Plantania contributes a noteworthy bottleneck guitar solo.  At times the song proceeds as a straight-up blues classic but takes a rather psychedelic turn in the guitar tracks.  If you stay with Davis you will be rewarded with Donovan’s “Wear Your Love Like Heaven,” interpreted as a reggae song in honor of Bob Marley.  It works amazingly well in a reggae rhythm.

Davis’s own songs range from intimate to tastefully raucus.  “I Wish I Hadn’t Stayed Away so Long” expresses the sentiment of his hero, Pete Seeger, who regretted not spending more time with his wife, and Davis’s choked-up vocals portray his own feelings as a well-traveled musician leaving loved ones at home.  Back-up singers give the song a Seeger-esque/Peter, Paul and Mary nostalgia that tugs at the heartstrings.  “Taking Just a Little Bit of Time” reminds listeners to put down the phone and go fishing once in a while.  “She Just Wants to be Loved” is a distressing portrait of a lonely lady (imagine Bob Dylan retooling “Eleanor Rigby”), with Hammond organ and backing singers contributing to a rather heavy sound, but they help to keep the six minute song from becoming maudlin.  In contrast, the sweet finger-picking backdrop of “Maybe I’ll Go” belies the frustrated lyric about a man driven to distraction by a woman’s moody ways.  “Blackberry Kisses” is an acoustic breath of fresh air, but likely won’t satisfy Davis’s blues-loving fans.  Banjo and acoustic bass are the stark accompaniment to Davis’s rough vocals, but as a fan of Garrison Keillor, Davis might be expected to wax poetic in an acoustic drawl:  “Do they taste like sunshine? Or do they taste like moonshine? (I really hope moonshine!)”

“Shake it Like Sonny Did” is dedicated to Piedmont blues harmonica player Sonny Terry, another of Davis’s influences.  Chopsticks striking a table and a bass drum provide the rhythmic backing for the song, with Peck Wallace’s banjo and Davis’s harmonica filling out the instrumentals.  For fans of Davis’s stripped-down homespun blues, this track will likely hold the most appeal.

Kokomo Kidd is a departure from Davis’s most recent album, Juba Dance.  Though at times Davis seems too enamored of the producer role, the songs are compelling and interesting even when a bit unexpected.