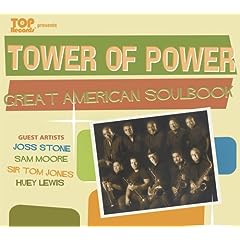 Whenever a band is defined as having a powerfully distinctive sound there’s a lot more going on than just great individual playing.  Often such a scenario involves a combination of exceptional musicians and singers; masterful arranging and studio engineering techniques; time allotted for musicians and singers to jell and become a unified voice; and someone who provides directive oversight to steer and fine tune these elements into a cohesive unit of sound and energy.  For 40 years, Tower of Power (TOP) has managed to bring these elements together to create their own brand of soul music, unquestionably establishing the band at the top of their game.

In 1968, TOP founders Emilio Castillo (tenor saxophonist) and Stephen “Doc” Kupka (baritone saxophonist), the steering duo behind the band’s success, took their cues from Sly & the Family Stone, Bobby “Blue” Bland, Booker T. & the MG’s and other 1960s masters of soul, funk, and pop musicians to establish their own sound.  They added their original songs, a powerful line up of musicians in the rhythm and horn sections, equally robust lead and supporting singers, and especially rock-solid horn arrangements that gave TOP its signature sound.  Regardless of the inevitable changes over the decades in the band’s membership, Castillo says “We have a definite style to the way we approach section work, we clip our notes, we get very tight. We’ve got to have this “ESP” going between the guys as far as how to interpret certain horn licks.”

For 25 years Greg Adams has defined TOP’s tight horn arrangements, inflecting a mixture of percussive and soulful linear accents above the infectious grooves of the rhythm section.  The arrangements have been esteemed by a significant number of leading pop, rock, blues and soul musicians–including Bonnie Raitt, Aerosmith, and Little Feat– who have hired the horn section and used the band’s arrangers to boost their own sound.

Castillo produced nine songs on the CD, while four more were under the direction of L.A. funk master George Duke.  The majority of the horn arrangements are under the control of Greg Adams’ protégé, Dave Eskridge.  TOP’s current lead vocalist, Larry Braggs, delivers tremendously stirring solo performances on most of the songs. The group is also joined by four equally stellar vocal guest talents: Tom Jones sings Sam & Dave’s “I thank You;”  Joss Stone joins Braggs for duos on “It takes Two” and “Your Precious Love;” Sam Moore delivers a laid back rendition of “Mr. Pitiful;” and Huey Lewis croons Wilson Pickett’s “634-5789.”  Overall, The Great American Soulbook is a great album and the perfect start to summer.