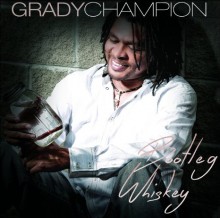 Grady Champion’s Bootleg Whiskey (2014) is the Mississippi bluesman’s first album on the Malaco Records label. Champion, originally from rural Canton, MS, has a smoky voice and driving harmonica style. By combining his blues roots with a backing band (electric organ and horns) typical of Memphis soul, Bootleg Whiskey appeals to fans of both electric blues and soul-blues.

The album’s title track is a fun, up-beat soul song that carries on the Deep South blues tradition of celebrating the virtues of cheap whiskey and ugly women. The fourth track on the album, “Home Alone,” allows Champion to show off his harmonica chops. It is the harmonica solo and the dialogue between harmonica and horn section that make this one of the album’s standout selections. The track also prominently features a bass that is reverential of the Memphis “big bottom” sound. “South Side,” the album’s featured single, was written by the late George Jackson and is easily the most soulful of the tracks on the album. With a laid-back groove, lush chords on the electric organ, and a catchy chorus, “South Side” is perfect for slow dancing. “Here We Go, Ya’ll” is fast-paced and high energy. The hard-hitting harmonica riffs, the steady rhythms on the drums, the staccato chords on the electric organ, and the gritty and distorted electric guitar give the song an edgy attitude that suits its “party hard” theme. This is a song that is sure to get a crowd at any late-night club or juke on their feet.

The surprise of the album is its closing track. “White Boy with the Blues” is a gospel song that includes a sermon about a poor white boy that meets an untimely death after being turned away by an African American family. The song begins with an African American vocal quartet singing “Amazing Grace.” The quartet, like many of the great Memphis vocal quartets who recorded in the 1980s and 1990s, is accompanied by a gospel band (electric organ, electric piano, electric guitar, and drums). The heavy emotional weight of the lyrics are made all the more impactful by the vocal quartets rendition of “Precious Memories” at the end of the song:

Champion, who considers himself a torch-bearer in a long line of Mississippi bluesmen, has been drawing crowds since the late 1990s. He has performed throughout North America and has participated in the Legendary Rhythm and Blues Cruise. He is also the 2010 winner of the Blues Foundation’s International Blues Challenge and he has received multiple nominations for a Blues Music Award. In August, 2014, Champion was featured on the cover of Living Blues Magazine. Champion is currently on tour across Alberta, Canada and throughout the South, with stops including Memphis, TN, Jackson, MS, Shreveport, LA, and Tallahassee, FL.