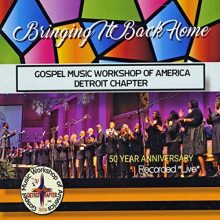 In 1967, Rev. James Cleveland founded the Gospel Music Workshop of America (GMWA) and organized the first national convention the following year at Detroit’s King Solomon Baptist Church. One of the most notable events of that convention was the formation of a 250 member mass choir that marched in singing “We Are on Our Way” by Eugene Dukes of Philadelphia, PA. Now, fifty years later, the GMWA Detroit Chapter celebrates this anniversary with the album, Bringing It Back Home. Recorded live at Second Ebenezer Church with Bishop Greg Davis serving as emcee, the album’s 12 tracks showcase the development of the mass choir movement, from uptempo contemporary worship songs such as “Bless the Lord” and “All is Well” featuring Theresa Moss, to more traditional choral works including  “O King” and “Kept By the Grace of God” featuring Charles Thompson. Representing one of the best mass choirs in the country, the Detroit Chapter blends the secular sounds of the Motor City with the sacred on this fantastic project. A must have for any fan of gospel music!