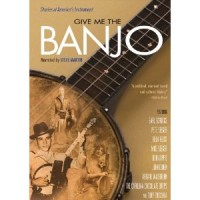 Title: Give Me the Banjo

A documentary claiming to encompass the history of the banjo is setting a high standard. The banjo, called “America’s quintessential instrument” by the filmmakers, developed from African stringed instruments brought over by slaves. It became part of the full American musical vernacular by the mid-1800s. When this movie isn’t trying to make vague political statements about racial politics as related to a musical instrument, it’s relatively interesting. However, its scattered focus and meandering pace results in a mediocre and incomplete telling of what should be a fascinating tale.

For instance, we’re never told or shown exactly what the precursors to the banjo looked or sounded like, or where in Africa they originated. Also left out are any details about how the banjo spread from the slave quarters to the whole of American folk music. It would also be nice to see how a banjo is put together, and what different types are used today (apparently the producers behind The Banjo Project originally conceived of a 3-part series, which unfortunately had to be distilled into one episode).

However, all is not lost. There is a huge redeeming feature to this film—plenty of great music featuring the banjo. The story is at its best when it centers on banjo players past and present (Pete Seeger, Earl Scruggs, Taj Mahal, Carolina Chocolate Drops, etc.).  Since the banjo is used in almost every form of American folk music, the film can spotlight a diverse array of players and styles. The filmmakers should have let the music and musicians do all of the talking, and they would have ended up with a more direct and powerful story. Narrator Steve Martin, who’s technically adept with a banjo but a rather dull musical entertainer, gets too much screen time.

The pros and cons are aptly illustrated in the official trailer:

If you like the sound of a well-played banjo and are curious about American folk music, then this movie is worth viewing. It premiered on PBS last year, so it might air again on your local PBS station. However, given the lax focus and sluggish pacing, plus the inappropriate attempts to score political-correctness points, it’s not recommended for purchase. One caveat: the for-sale package includes an insert listing all the old and new musical sources heard in the film, and that is worth owning by a true banjo aficionado.