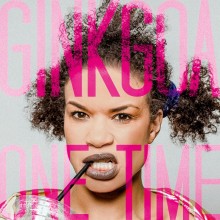 Ginkgoa, the swing-inspired electronic music duo, was created when native New Yorker and vocalist Nicolle Rochelle ran into producer Antoine Chatenet in a Paris club. Chatenet’s experience with French electronic music paired seamlessly with Nicolle’s love for swing dance music, resulting in the creation of a high-energy genre that the duo calls “Future Swing.” Their latest EP, One Time, amps up their signature sound with more emphasis on the electronic and trap influences that their audience can’t get enough of.

One Time is an edgy, party-starting EP composed of five tracks that the duo composed, wrote, and produced themselves. Songs such as the gritty “Don’t Give a Damn” were created in a hotel room during Ginkgoa’s Chinese tour through what can best be described as trial-and-error, then debuted at their next show. According to Nicolle, “we make adjustments based on our concerts and what we feel the audience may want more of, then the creative juices start flowing.”  On “Boy Bounce,” their first official video single for the album, the duo demonstrates their unique blend of jazz, rap, and feminist electro pop music combined with swing and bounce dance moves:

It is no surprise that Ginkgoa’s music is a hit with the crowds. From Chatenet’s infectious beats and perfectly-timed drops to Nicolle’s unique swing-style vocals, Ginkgoa has developed a distinct sound that is driven by their audience. Ginkgoa’s upcoming US Summer tour, if it’s anything like their previous performances, is sure to be a high-energy experience that you won’t want to miss.