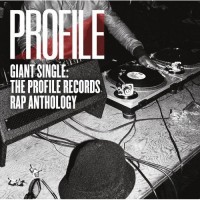 Giant Single is a fantastic anthology of Profile Records, a major label in the early days of hip hop. The 2-CD set traces the label’s success chronologically from the 1981 classic party-rap hit “Genius Rap” by Dr. Jeckyll and Mr. Hyde to 1996’s “Luchini AKA This Is It” from Camp Lo.  Featured are hip hop tracks that have, in time, become classics like Rob Base & D.J. E-Z Rock’s “It Takes Two” and Run D.M.C.’s rock-rap crossover hit “Walk This Way,” offering insight into the evolution of hip hop from an urban dance sub-genre to a musical category in its own right.

The liner notes to this collection provide a history of the label and its role in the success of hip hop as a mainstream genre. In 1983 a young Russell Simmons pitched a demo tape for the group he managed, “Runde MC,” to the label’s founders, Cory Robbins and Steve Plotnicki, who took a chance on the group and signed them with a $3,000 advance. The group, which changed its name to Run D.M.C., went on to become the first rap superstars—hailed as stars both in the streets and the suburbs—and their Profile Records’ single “Rock Box” made history as the first rap video to be shown on MTV.

This anthology is a great acquisition for anyone who wants to make headway in the sometimes foggy and always disputed world of hip hop history. Reading the liner notes in combination with listening to the album provides a crash course—one can trace mainstream successes while also making connections with the ways in which hip hop  emerged as the music of marginalized youth from different backgrounds who developed their own sub-genres.  For example, Asher D & Daddy Freddy’s reggae inspired “Ragamuffin Hip-Hop,” with its patois-influenced spitting style, became a rap standard imitated by many artists from Snow to Busta Rhymes, while The Showboys created a proto-bounce style in “Drag Rap.”

If you want an accessible entre to the study of hip hop, pick up Giant Single: The Profile Records Rap Anthology and travel back to the glory days.