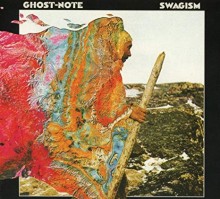 Ghost-Note is a project led by two Snarky Puppy members, Robert “Sput” Searight and Nate Werth, who perform with a rotating cast of top session players.  Their newest album, Swagism, is the group’s sprawling and definitive artistic statement, one that is funky, jazzy, and experimental all at once. The record combines grooves that hit hard on the one, progressive jazz gestures, and spoken voicemail interludes that advance the double album’s conceptual and musical narrative.

Ghost-Note’s approach is perhaps best summed up by the album’s opening track, a spoken intro that questions the way that people value both music and choice as concepts, setting up the band as breaking down social and taste barriers through its conceptual framework of “swag,” despite the fact that it’s a band that likely appeals to a fairly narrow set of jazz-hipster listeners.  However, when compared with its bigger brother, Snarky Puppy, Ghost-Note’s approach would certainly be a bit more accessible to a listener not deeply invested in progressive jazz.  Tracks like the title track and “Pacemaker” rely on infectious and danceable grooves, despite featuring impressive improvisation from the group’s stellar ensemble.  Generally speaking, this approach holds true, with groove taking precedence over virtuosity on Swagism. Even the jarring “Shrill Tones” grooves in the way that the Brecker Brother’s “Some Skunk Funk” does—highly rhythmic within its complex melodic phrases. The band does venture into ambient outer space soundscapes once or twice, notably with Kamasi Washington’s featured performance on the socially-conscious “No More Silence.” However, Ghost-Note quickly returns to earth with tracks like “Nod to Dilla,” a miniature headphone symphony that serves as a tribute to the influential hip hop producer J Dilla, and asserts that above all else, groove animates the group’s approach to music.

Swagism, and Ghost-Note’s work in general, represents what funky jazz could have been had it not largely been commandeered by the wah-wah guitars of ‘70s smooth jazz—that is, culturally relevant while musically complex.  This album is challenging, hip, and a fun listen—a trifecta that other groups in every genre should learn from.