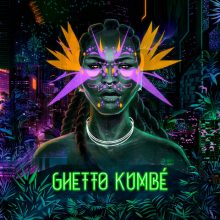 In each track on Ghetto Kumbé, the trio’s Columbian roots are prominent. Caribbean house beats and Afro-Colombian rhythms form the base of their songs, combined with UK Bass scene-inspired production courtesy of co-producer The Busy Twist. The album’s latest single, “Tambó,” is a melancholy and introspective look at sincere love and loss while another single, “Vamo a Dale Duro,” is a fiery critique of capitalism, income inequality, and political corruption.