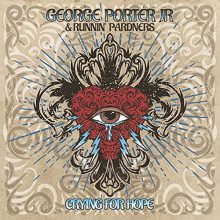 Bassist George Porter Jr. is best known as one of the founding members of The Meters, the seminal funk band that combined New Orleans street rhythms with a second line vibe and fatback drums to create their own unique, laidback style. After several decades performing with The Meters (later renamed The Funky Meters) and working as a session musician, Porter decided to form his own band in 1990.  Now, 30 years later, George Porter Jr. & The Runnin’ Pardners offer their latest release, Crying for Hope, that lays down 12 tracks of heavy funk amidst themes of social justice.

Porter is joined by the group’s current line-up, featuring drummer Terrence “Groove Guardian” Houston, keyboardist Michael Lemmler and guitarist Chris Adkins. Inspired by unfinished tracks recorded several years ago, Porter built this project from the bass up, collaborating virtually during the pandemic with other band members. The group digs into a mid-tempo groove on the opening title track, “Crying for Hope,” about the state of the country where “Our young men keep on dying, on the streets where there’s no hope.” Another highlight is the laid back funk-rock groove on the song, “Wanna Get Funky.”  Other tracks such as “I’m Barely” and “You Just Got Tired” are focused on love and relationships. The majority of the album, however, offers supremely funky instrumentals, such as the fat bass licks of “Cloud Funk” and the Hammond organ showcase “A Taste of Truth.”

George Porter Jr. & Runnin’ Pardners prove that New Orleans funk is alive and thriving with Crying for Hope, drawing upon tough times to create an album that provides great grooves.