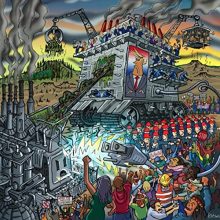 One of the most diverse musical collectives in the country, Free Radicals includes over 50 musicians that range from 4-year-old attendees of Peace Camp Houston to 92-year-old vibraphone player Harry Sheppard. These musicians bring together their varied backgrounds and talents on White Power Outage Volume 1, a revolutionary album that demands an end to white supremacy in the arts, culture, and politics.

Drummer, producer and activist Nick Cooper initially facilitated the collective over five years by bringing together many of the currentvocalists and musicians in Free Radicals. After receiving a massively positive response from rappers, poets, and singers all around Houston, the group was encouraged to compile tracks recorded over the years for release as White Power Outage Volume 1 (they are currently recording a second volume). The expressive and often emotional tracks on this compilation span a wide array of genres: from scathing raps by Nosaprise (“Cash Out”) and D-Ology (“Look At That”), to groovy hip-hop and soul tracks by EQuality (“Koan”) and Shrey Day (“Now Ending White Supremacy”), and the defiant poetry of Dr. Obidike Kamau on the opening track (“America Is a Lie”).

The artists on White Power Outage are acting as one of the few checks and balances on a system far out of balance. Using their musical talents and coming together as a group to amplify the diverse voices of the Houston community, Free Radicals take aim at the racial disparity and oppression in this country.