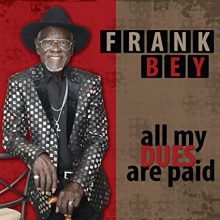 Though Bey was based in Philadelphia in recent years, All My Dues Are Paid also reflects the current San Francisco Bay Area blues scene. Notable Bay Area blues musicians on this release include keyboardist Rick Estrin (formerly of Little Charlie & Nightcats), keyboardist Jim Pugh, saxophonist Nancy Wright, guitarists Kid Andersen and “Mighty” Mike Schermer, legendary bassist Jerry Jemmott, and backing vocalist Lisa Leuschner Andersen. The album was recorded at Andersen’s Greaseland Studios in San Jose, California, not far from the Poor House Bistro, a local New Orleans-themed blues bar that has served as a West Coast home for Bey and many other Bay Area blues musicians. As local blues singer and creator of the “Bollywood Blues” genre Aki Kumar once amusingly stated, “There’s only one blues band in the Bay Area, but it has 500 members.”

Regarding the songs, there are several examples of classic blues grooves, including finger-snapping midtempo soul (“Calling All Fools”), Stax-style Memphis soul (“All My Dues are Paid”), slinky slow jazz numbers (“I Bet I Never Cross Your Mind”), and fast burners (“Never No More”). Rick Estrin and Mike Schermer have two songs each, as does somewhat overlooked R&B pioneer Percy Mayfield. Although “All My Dues are Paid” is the autobiographical centerpiece of the album, “One of These Days,” while ostensibly a breakup song, takes on a whole new heartbreaking meaning in light of Bey’s recent passing: “One of these days, you’re going to miss me…you’ll turn around, and I’ll be gone…”

Aside from the aforementioned traditional blues numbers by Estrin, Schermer, and Mayfield, the album contains some song choices that are less traditional than one might expect. “Idle Hands” is a cover of the classic Eddie Palmieri and Harlem River Drive salsa song. Bey also covers overlooked R&B singer Arthur Alexander’s “If It’s Really Gotta Be this Way,” along with the George Jones classic “He Stopped Loving Her Today,” Lou Reed’s “Perfect Day,” and his showstopping version of John Lennon’s “Imagine.”

Finally, Bey’s relentless positivity should be remarked upon, particularly on the last two tracks—Mike Schermer’s “One Thing Every Day” and “Imagine.” All My Dues Are Paid is a truly inspiring release in our trying times. Highly recommended.