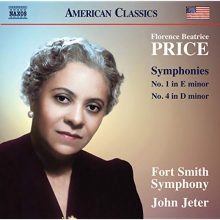 Born in segregated Little Rock, Arkansas in 1887, Florence Price attended the New England Conservatory when local schools refused to admit her, studying composition with George Whitefield Chadwick. Although she returned to Arkansas for a time, she and her daughters moved to Chicago in 1927 due to increased racial violence in Little Rock. There, she met prominent members of the Chicago’s African American arts scene such as Estelle Bonds, whose daughter, Margaret Bonds, became one of Price’s students. Though primarily known today as a composer of songs, notably “My Soul’s Been Anchored in the Lord” and “Songs to the Dark Virgin” popularized by Marian Anderson, Price was also the first African American woman to have a symphony performed by a major orchestra (the Chicago Symphony Orchestra performed her Symphony No. 1 at the World’s Fair in 1933). Unfortunately, many of her works were largely forgotten after her death, with major conductors like Serge Koussevitzky declining to program her symphonies. In fact, several of her works, including the Fourth Symphony recorded here, were thought to be lost until the manuscripts were rediscovered in a house in St. Anne, Illinois. This symphony was never performed during Price’s lifetime, and is instead receiving its premiere on this CD.

Price’s Symphony No. 1 and No. 4 are performed here by the Fort Smith Symphony under the direction of John Jeter. This isn’t the first time the ensemble has recorded works by African American composers, having previously issued the first complete cycle of William Grant Still’s symphonies, also on the Naxos label. Their premiere of Price’s Symphony No. 4 is also fitting, since Fort Smith, Arkansas is close to Price’s birthplace. The performance is overall lush and captivating, and though there are occasional moments of imprecision, the chance to hear Price’s music, particularly the premiere recording of the Fourth Symphony, more than makes up for them.

Much of Price’s music, easily heard in her Symphony No. 1, retains some of the elements of the Second New England School that she picked up from New England Conservatory, as well as sharing similarities with Dvořák, particularly his Symphony No. 9 “From the New World.” This connection makes sense, as Dvořák was one of the first Europeans to encourage American composers to embrace their own folk materials, specifically the musical traditions of Native Americans and African Americans. The first movement begins like a typical late Romantic period symphony in the style of Brahms, and though there are no specific quotes of spiritual tunes, both themes borrow the phrasing, pentatonic scales, and style of that genre. The development section makes use of the call-and-response technique common to many afrological musics, passing fragments of the tune across the ensemble. The second, slow movement is hymn-like, the opening brass chorale reminiscent of a church organ. The third movement, like most symphonies written in the classical idiom, is a dance, but unlike its European counterparts, this is a Juba dance. This movement’s connection to African American folk material is more concrete than the others; the Juba dance is a complex routine featuring cross-rhythms and body percussion thought to have been created when slave owners banned drums and other rhythm instruments from plantations. Price’s use of it here is playful and witty, incorporating a three-against-two rhythm and occasional interjections from a slide whistle. The finale movement is back to the more conservative Romantic style, although Price incorporates more percussion than is typical of her contemporaries, particularly at the end of the movement when the timpani and cymbals rise out of the texture.

Symphony No. 4 was never performed during Price’s lifetime, and it is unclear whether Price had an intended premiere in mind for the work. Completed in 1945, thirteen years after Symphony No. 1, it shares many stylistic similarities with the earlier symphony. The first movement features many of the same approaches, though the tunes are more fragmentary, including a short reference to “Wade in the Water.” The overall feeling of the movement becomes more driving than Price’s earlier symphony, though the second, lyrical theme provides a lush contrast. Where the second movement of Symphony No. 1 was a hymn-like setting, this second movement shifts between a lullaby-like melody and a much more somber tone, at times sounding almost regretful. The third movement here is also based on a Juba dance, just as playful but with an added element of sarcasm reminiscent of Mahler’s dance movements. The final scherzo has a typical feeling of perpetual motion, compounded by Price’s use of sequential passages and a return to the call-and-response technique passing fragments of the melody across the ensemble. The movement shifts between bold brass and percussion calls, stormy string passages, and cheeky woodwind interjections, culminating in a triumphant, percussion-heavy coda.

Overall, this performance by the Fort Smith Symphony is a delight to listen to, and offers a much needed recording of Price’s Symphony No. 4. After almost losing much of her work to obscurity, the chance to hear Price’s symphonic works on a major label is all the more important.