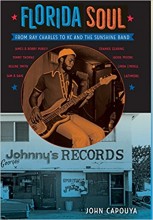 Title: Florida Soul: From Ray Charles to KC and the Sunshine Band

Though the state of Florida doesn’t immediately come to mind as a hotbed of soul music, journalist John Capouya attempts to correct this oversight with his new book Florida Soul: From Ray Charles to KC and the Sunshine Band. Using his “antennae for passionate vocals and funky sounds with Florida origins,” he delves into the period from 1945-1980, when Florida produced “some of the most electric, emotive soul music this country has ever heard.” Capouya attributes this flourishing scene in part to the fact that Florida, along with Texas, was the “densest and richest segment of the chitlin’ circuit,” bringing all of the major African American artists through the state.

Each of the 20 chapters is dedicated to a particular artist or producer, some famous and others lesser known, but all contributing an interesting story: Ray Charles (“the catalyst of the entire soul explosion came from Greenville, FL”); Sam Moore (“from Miami’s Overtown neighborhood”); sax players Ernie Calhoun and Noble “Thin Man” Watts; Lavell Kamma and the 100 Hour Counts (“one of Florida’s longest-running soul groups”), the singing duo James & Bobby Purify (one chapter each); vocalists Helen Smith, Frankie Gearing, Jackie Moore, and Timmy Thomas (his 1972 anthem “Why Can’t We Live Together” is sampled in Drake’s “Hotline Bling); Latimore (who first recorded for Henry Stone), Wayne Cochran (“the white James Brown”); white soul singer Linda Lyndell; producer Papa Don Schroeder, and of course KC and the Sunshine Band. Other chapters are dedicated to the state’s most famous label owners—Henry Stone and T.K. Productions (which rightly receives two chapters) and Willie Clarke and Deep City Records—plus a chapter explaining how “The Twist Came from Tampa.” Along the way many other artists are mentioned, along with other Florida labels such as Jayville, Tener, Marlin, Leo, Alston, D & B, Glades, and Bound Sound.

Florida Soul is an engaging and informative read, placing an emphasis on the stories behind the singers and the songs gleaned from historical research as well as interviews with surviving musicians, singers, producers, deejays, and other industry personnel. The book is an important resource on a music scene that’s never been fully documented within a single volume, adding greatly to our understanding of American music and, in particular, the soul, R&B, disco and funk grooves emanating from the Sunshine State in waves the spread across the nation.