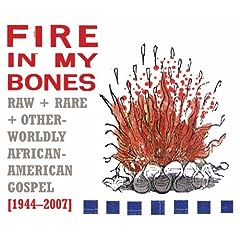 Fire In My Bones features 80 amazing gospel performances that you’ve probably never heard but really should. With able assistance from Kevin Nutt of WFMU’s “Sinner’s Crossroads” and a handful of dedicated gospel music collectors, Mike McGonigal assembled this three-disc set of out-of-print and obscure selections. An admirably-compiled and illustrated companion booklet provides as much detail on the recordings as is available.

This eclectic and electrifying collection is different from other compilations of gospel classics in that it does not focus exclusively on a specific location, gospel music style (e.g., quartet), artist, record label or timeframe. It also doesn’t line up tracks in chronological order. Establishing loose time parameters of 1944 to the present day, the collection leaps back and forth with glee between decades. Its unifying thread is the raw and genuine emotion expressed in musical performances and sermonettes by largely-forgotten performers and ministers. The singers and musicians are so rooted in the old time way, in fact, that it is often difficult to aurally define a song’s vintage by the performance alone.

Fire In My Bones draws on a variety of sources: mostly old 78s and 45s but also field recordings made by modern-day Alan Lomaxes in search of the untarnished. This is not to suggest that it contains all unknowns; the set also includes examples by well-known gospel artists such as Elder Samuel Patterson, Little Ax & the Golden Echoes, Rev. Robert Ballinger and Prof. J. Earle Hines. But for every track by Sister O.M. Terrell, Marie Knight and Lucille Barbee, who managed to eke out 15 minutes of fame (or more) in their day, Fire In My Bones introduces other equally intriguing but lesser-known performers such as the Hickory Bottom Harmoneers, Willie May Williams, and the Straight Street Holiness Group.

The compilation leans heavily on the sounds of the Sanctified Church, where any instrument is fair game as long as it gives praise. Electric guitars play a prominent role in Fire In My Bones. One recording in particular, “I Made a Vow to the Lord,” originally released in 1953 on Elko Records, sounds so much like Elder Utah Smith, it wouldn’t be surprising if it actually is Smith under a pseudonym. After all, Elko issued a 78 by a “Sister Christine” which was really a well-known coupling on BBS by the Clara Ward Singers.

The CD booklet presents brief stories behind the music that are often as fascinating as the performances themselves. The selections from Rochester, New York’s Fine Records, for instance, would never have made it to this compilation had they not been saved from complete deterioration by Australian Mark Taylor. Taylor purchased the entire contents of the already-dilapidated studios and shipped them thousands of miles, square-inch by square-inch, to his home for cleaning and restoring. Or Elder Roma Wilson and Family, a harmonica band who in 1948 became unwitting recording artists. They made a test recording in Detroit, but later found out their performance was released commercially on Philadelphia’s famed Gotham Records.

What Fire In My Bones tells us, more than anything, is that the vein of astonishingly honest and powerful gospel recordings is rich, exciting, overwhelming, and the largest remaining frontier in American music collecting and archiving.

NOTE: A portion of the proceeds from the sale of Fire In My Bones will benefit the New Orleans Musicians Relief Fund.

Reviewed by Bob Marovitch, Editor, The Black Gospel Blog (reprinted with permission from the author; copyright 2009 by Robert M. Marovich).