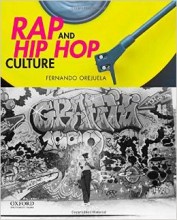 Dr. Fernando Orejuela, a senior lecturer in the Department of Folklore and Ethnomusicology at Indiana University, is an expert in rap and hip hop. His new textbook, Rap and Hip Hop Culture, stands as a condensed articulation of many years of teaching and research experience ranging from popular music and body art to youth cultures and subculture studies.

Orejuela’s book “traces the ideological, social, historical, and cultural influences on a musical genre that first came to prominence in the mid-1970s in one of New York’s toughest neighborhoods, the South Bronx.” Rap and Hip Hop Culture is therefore not just another book about contemporary youth musical art but one that throws light on “key performers, producers, and voices in the rap and hip hop movements, using their stories to illuminate the underlying issues of racism, poverty, prejudice, and artistic freedom that are part of rap and hip hop’s ongoing legacy.”

While there is often a tendency to dismiss rap and hip hop music because of its overt affirmation of or reference to violence, sexism, and racial stereotyping, Orejuela’s text is based on rigorous field research and delivers the important message that hip hop culture cannot just merely be ignored but demands a systematic and scientific investigation as a key to profound understanding of the attitudes and proclivities of modern youth. A companion website available via Oxford University Press offers additional resources for both students and instructors, including playlists and videos.