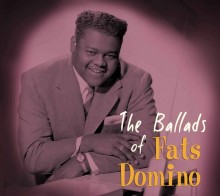 One of the architects of rock and roll, Fats Domino is also remembered as one of New Orleans’ greatest musicians, which is quite an honor in a city that produced so many legends. Now the venerable Bear Family label honors Fats, who died last year, with this compilation featuring 32 ballads culled from his 1955-1962 Imperial Records sides. Most were either produced, co-written/arranged, and/or performed (on trumpet) by the great Dave Bartholomew and recorded at Cosimo Matassa’s studio.

Instead of the red-hot sound of the Crescent City’s rhythm and rocking blues scene, The Ballads of Fats Domino highlights many of his lesser known gems. As noted author/historian Bill Dahl states in the liner notes, “Fats without his trademark rocking rhythms [was] every bit as effective and lovable as when the big beat was scalding behind him.” And that’s the truth!

This “blusier, atmospheric side” of Fats is certainly apparent on classics like “Blueberry Hill,” which opens the set, and a pair string drenched sides, “Walking to New Orleans” and “Three Nights a Week,” both R&B hits despite Domino’s opinion that “people don’t like me with too many violins.” The hardships of life on the road spurred more than a few ‘homesick’ ballads that are great examples of Fats’ signature story songs: “I Miss You So” (1961); a 1962 remake of “Goin’ Home” (the original side was released a decade prior); and the earliest song on the set, “Helping Hand (A Long Way From Home)” from 1955.

This is just a small taste of what’s in store on The Ballads of Fats Domino, produced with the typical high standards we’ve come to expect from Bear Family, including illustrated liner notes and a complete session discography.