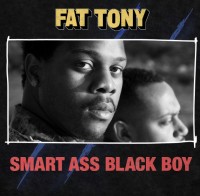 Fat Tony, the chosen moniker of 25-year-old Nigerian-American rapper Anthony Obi, has already garnered a huge following in his hometown of Houston, Texas and an ever-growing following across the country due to his witty, but not overly precious, danceable raps. Working primarily with long-time collaborator, producer Tom Cruz, Tony presents an image that is both aware and laid back. When asked how he manages to juggle politics, pop sensibilities and  authenticity so coolly, he responded:

I think I balance all these things because my aim is to be a great artist in the classic sense. If you look at some of the best songwriters like Prince, Neil Young, 2pac, Biggie, etc., they were all able to tackle various topics while still remaining genuine and relatable.

“Genuine and relatable” are two perfect adjectives to describe the songs on Fat Tony’s new release Smart Ass Black Boy. Tony has a skill seems rare in hip-hop: the ability to balance political messages with block-party bangers. When this balance is achieved, as on SABB, hip-hop has the ability to move beyond the single focused backpack rapper criticizing the school system or the radio rapper focused on excessive living, and represent the reality of being a young person of color today.

Marketers have often tried to divide hip-hop into camps based on lyrical content—gangstas from afrocentric ankh wearing brothers from pimps from club bangers—but in real life people are not so black and white. Young rappers like Fat Tony represent the multifaceted truth of urban life by creating truly biographical music, not music that veers into the realm of oversharing self-involvement, but music that reflects both the experience of oppression and the experience of macking on a cute girl, the experience of being a first generation American and the experience of chilling with your friends at a party.

Perhaps the most obvious example of this reflective writing style comes in the first two lines of “Hood Party,” featuring ex Das Racist and Boy Crisis member Kool A.D. and Queens’ own Despot:

I met her at the hood party, even white people know that it’s a good party
Look around your hood, they probably rent a couple properties
Around my block I hear they’re building buildings with a lobby

There are a few layers to this verse. The first is, simply, that it’s a really catchy hook, with Tony’s laid back Houstonian delivery feeling like he’s just casually chatting at you. After that layer, however, interpretation goes in two directions. On a cursory level, if you’re dancing to this song and having a good time, it’s just a party song, shouting out to good times and making a crack at the supposed stodginess of white people. A closer listen, if you’re listening to this song on headphones during your commute, and it’s clear that he’s talking about the rapid gentrification of traditionally maligned urban areas. What makes this verse great, however, isn’t just that it’s multi-leveled, but rather that it’s multileveled in the same way our thought processes often are. It isn’t a polemic against gentrification, it is just remarking on how strange these urban mechanizations can seem.

The rest of the album is filled with songs that reflect that contemporary experience of being aware of the disadvantages of being a person of color in the U.S., but also reveling in the advantages of being a person in general in the U.S. and celebrating the positive above all. One of the most sweetly relatable tracks on SABB is “Father’s Day,” a song lovingly dedicated to the classic first generation immigrant experience of having a parent who wanted to raise their child in America but then grew upset when they realized they were raising an American child. While the inner verses deal with the pain and frustration felt on both sides when a son doesn’t live up to his father’s expectations, the last verse is proud, admitting what we all have to admit about family:

And it feels so incredible to admit
From my skin tone to my 10 toes, I am him
From my earlobes to my elbows to my genome
I can’t deny it, not even if I try it

Fat Tony represents one of the greatest things to come out of this new generation of D.I.Y “internet famous” rappers: real realness. Not the realness that leads to arguments about what hood someone really grew up in or if they were really in that gang, but the realness of honest self expression the deals openly with the good times and the bad.